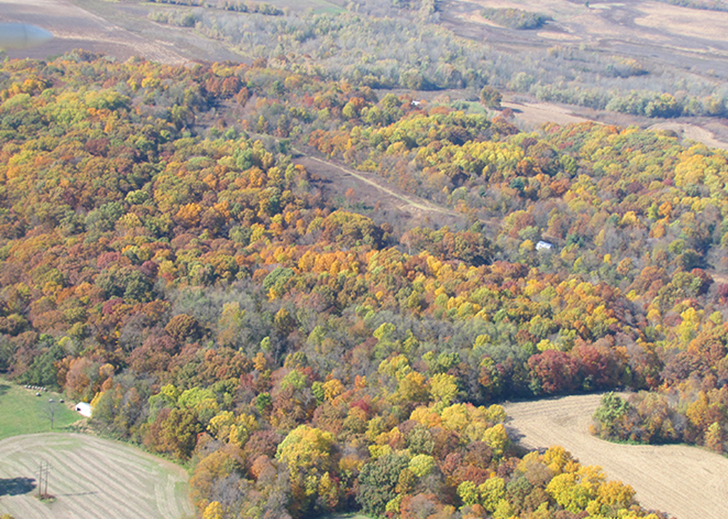 One gorgeous spring day in April 2021, I shed the constraints of the pandemic and visited the Atherton Island Natural Area, a stunning wild place about 20 miles north of Terre Haute, Indiana. The occasion was a wildflower hike organized by the Ouabache Land Conservancy (OLC).  My research mentor, Assistant Professor Esther Ngumbi, and I were invited by her colleague in the Entomology Department at the University of Illinois. The hikers consisted of Indiana conservationists, some adorable dogs, and a few entomologists from the university, all of us united by our enthusiasm for enjoying wild areas.

In spring, riparian areas hold the promise of new life — bright marigold lichens and velvety moss on rocks, green buds and catkins on trees, little shoots poking up from the ground, dried grasses from last season tipped with bursting seed pods containing fuzzy little seeds inside — just waiting for an aggressive wind to shake them free and scatter them on the fertile soil.

Despite spending many hours of my life becoming familiar with ecosystems alongside the Illinois branches west of the Wabash River, I was surprised to find so many unfamiliar flowers along the banks of Indiana tributaries. Atherton Island, a preserved natural area, is part of the eastern watershed of the Wabash River. Within the preserve, there are several unnamed creeks which flow out of the natural area and into the channelized Lyford Dike and Levee Association Ditch. These unnamed creeks empty into the Wabash, circulating with water from many other tributaries, including the Boneyard Creek, which runs through the campus of the University of Illinois at Urbana-Champaign. The name Wabash is the English spelling of the name given by French traders, Ouabache. This is a corruption of the Miami-Illinois Native American name for the river, waapaahšiiki, which roughly translates to “white-shining” or “water over white stones,” due to the distinctive limestone river bottoms.

The OLC and its members protect more than 800 acres of natural areas in west-central Indiana. I discovered the Atherton Island preserve through Jim Nardi, a Research Scientist in Entomology at the U of I, whose family used to own an 80-acre orchard there. Jim’s grandfather purchased the land around 1915 and planted orchards of apples, peaches, plums, and grapes. By the time Jim was born, 28 acres of orchards grew along the ridges. His parents sold the orchard and all of the equipment in 1970, and the property passed through four different owners before Jim was able to buy it back in 1993. The once picturesque orchards had fallen into disarray, and the house had burned down. There was junk everywhere — cars, an old bus, fridges and stoves — and all manner of trash was dumped into the ravines. Jim was perplexed that people could so mistreat the land. Nonetheless, he got right to work. He hauled out the junk, cut back and pulled out the invasive species such as black locust trees, bush honeysuckle, and multiflora rose, and built a Quonset hut to replace the old barn.

In early 2018, Jim and his spouse Joy generously donated the family’s land to the Atherton Island Natural Area, which was already part of OLC. And the Nardis have stayed busy; in 2021 they finally removed the last of all the old fence rows from the last hundred years. They have planted many native trees, starting with 800 planted by hand, including wild cherry, persimmons, tulip trees, and oaks — white, black red, pin, and chinkapin. In April, the month of my visit, they had just hired a forester to plant 16,000 more trees over 35 acres, using a tree bar planter to plant walnut trees, beechnuts, tulip trees, Kentucky coffee trees, and more oaks. They have also replanted 4.5 acres of native shortgrass prairie. As the Nardis told me, “This place is for the animals and wild things to live, and we humans are the visitors.”

Being an entomologist, Jim told us of the tiny gall wasps that live on white oak trees; they were everywhere when he was a kid, but their populations have seen steep declines. However, in the last few years, he has seen their galls in the trees again. Gall wasps are tiny, solitary wasps that inject an egg into plant tissue, which provides the perfect food and shelter for the developing larvae. The grub secretes chemicals and hormones which cause the plant tissue to develop and swell into a sphere, or gall. This doesn’t harm the tree, and the insects are an important source of food for birds. These wasps have two different generations each year; one of sexual young (both males and females) and one of asexual females (that may lay eggs without mating). These wasps were studied for 20 years by Alfred Kinsey, until he left the field of entomology to study human sexual behavior and develop his famous Kinsey Scale. 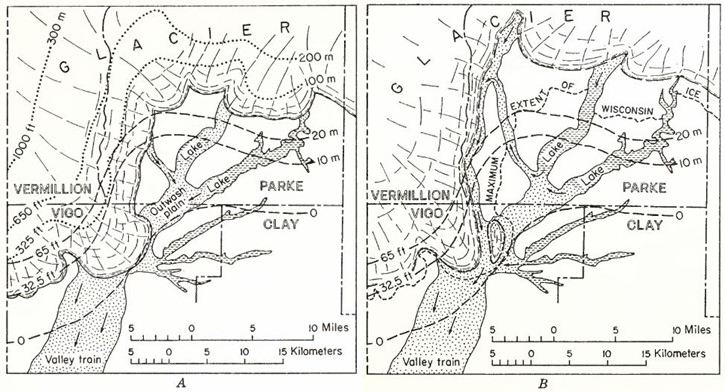 One of my fellow hikers, a geology enthusiast named Tom Zeller, told me Atherton Island was actually a land island, formed from sediment deposited by glacial meltwaters over several glaciations (Kansan, Illinoian, and Wisconsin) throughout the Pleistocene Epoch (between 2.58 million and 11,700 years ago). This land island was caused by an ice dam backing up the lake and then leaving a large amount of sediment behind. The resulting blockage caused the drainage of Raccoon Creek to reverse direction.

Jim stopped to discuss an Indiana native, the pawpaw tree, in bloom with deep burgundy flowers tipped in yellow. I’ve had the fruit before, known as the Indiana Banana. It is sweet and tangy, tasting like a cross between a banana and a mango. I’ve even planted pawpaw seeds, but had no luck growing the trees. Other well-informed hikers were happy to explain the trees’ preferences: Seedlings initially require shade to survive, but as they mature, they need sun to produce fruit. On other hikes, when I recognized the trees but found no fruit, I simply assumed some lucky squirrels ate them all. Apparently, it is difficult to get the fruit to set, as they are pollinated only by carrion flies. One hiker, Hannsford Mann, helpfully informed us that he takes roadkill he finds and hangs it from trees in his pawpaw patch, drawing flies to pollinate the flowers. His trees produce a large crop of fruit, and presumably no one is brave enough to pilfer his crop! 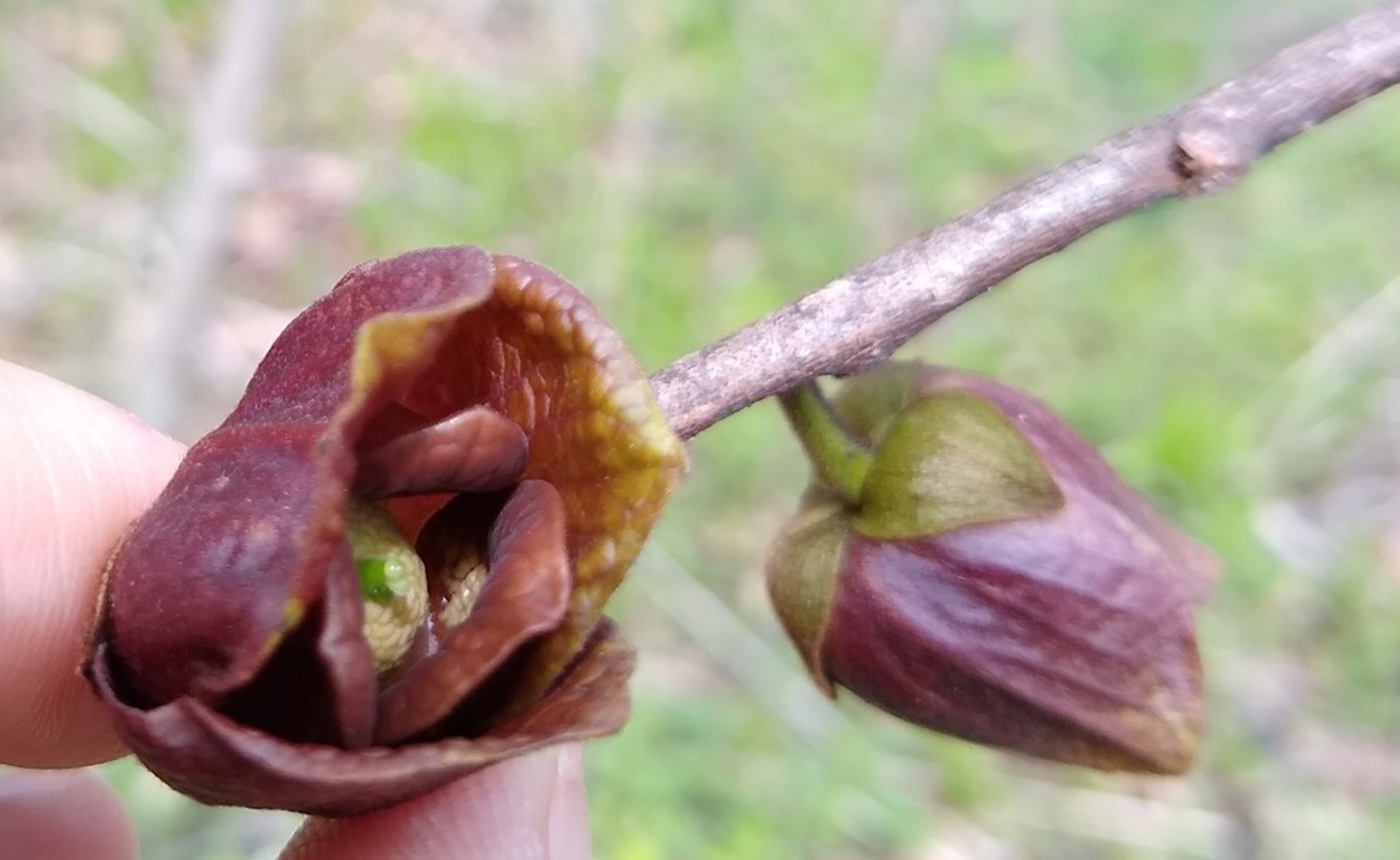 We didn’t see much wildlife, as there were about 30 of us talking and visiting along the hike, but the wildflowers were incredible! Thanks to a class I was taking on plant systematics, I was well prepared for identification of plant families. It was very enjoyable for me to recognize the flowering plant families I had learned in textbooks, while out in nature. One of the more remarkable flowers was the dwarf larkspur, an herbaceous perennial of the buttercup family, boasting a cluster of deep violet, spurred flowers. They made me think of a firework exploding with little purple stars. Another reason I noticed these flowers was their attractiveness to pollinators. Their nectar and pollen are especially attractive to long-tongued bees such as bumblebees (Bombus spp.), digger bees (Anthophora spp.), and miner bees (Osmia spp.).

As our hike was winding to its very satisfying conclusion, Jim told us what a pleasure it was to work with volunteers who donate their time to such a worthy environmental cause. The feeling was mutual. The hike was an inspiring experience for me; I was so glad to meet folks working to conserve wild spaces. We are all residents on this planet together, and meeting people working to conserve it reminded me that all of us, whatever our path, have a chance at creating a better, biodiverse world.

Erinn Dady is a senior majoring in Earth, Society, and Environmental Sustainability. After graduating in May 2022, she will pursue a graduate program in Ecology and Entomology. Through her undergraduate research in Entomology Assistant Professor Esther Ngumbi’s lab, Erinn is enthusiastic about improving food systems by helping farmers boost their crops’ defenses against insect herbivory.

This article was the Feature category winner in the 2021 Janelle Joseph Environmental Writing Contest.