The COVID-19 pandemic hasn’t only affected human life; the global climate also felt the impact of this historic event. There was a 6 to 7 percent decline in atmospheric carbon dioxide emissions last year due to a drastic reduction in travel and commuting. As encouraging as that sounds, 2020 was still one of the top three warmest years on record. Actually, all top 10 recorded warmest years have occurred between 2005 and 2020, each new year breaking the previous record. It doesn’t take a genius to see the trend: We’re in trouble.

As an optimist, I try to focus on solutions rather than despair over problems. Across the dark sea of climate anxiety there is a lighthouse of hope that catches my eye: biofuels. Biofuels are liquid fuels made from plant material and a promising alternative to fossil fuel energy sources. Alternative fuels are in need of rapid development because as human populations grow and living standards improve, global fuel consumption and prices are increasing. Simultaneously, our current fuel sources are finite and quickly being depleted. Biofuels can help meet this growing demand for energy through renewable means, and in some cases with benefits to our carbon equilibrium.

Many people know corn ethanol as a plant-based renewable energy source, but other options are also being considered. Some fuels are made from the secondary parts of crops — inedible parts like corn stalks or wheat straw. Another strategy is to grow a specific biofuel crop that is bred to produce higher quality feedstock for producing fuel. For example, pennycress is a new winter cover crop being developed for jet fuel, and researchers are selecting for seeds with the best oil composition. As a cover crop, pennycress also prevents soil erosion and nitrogen loss, making it an attractive cultivation option. 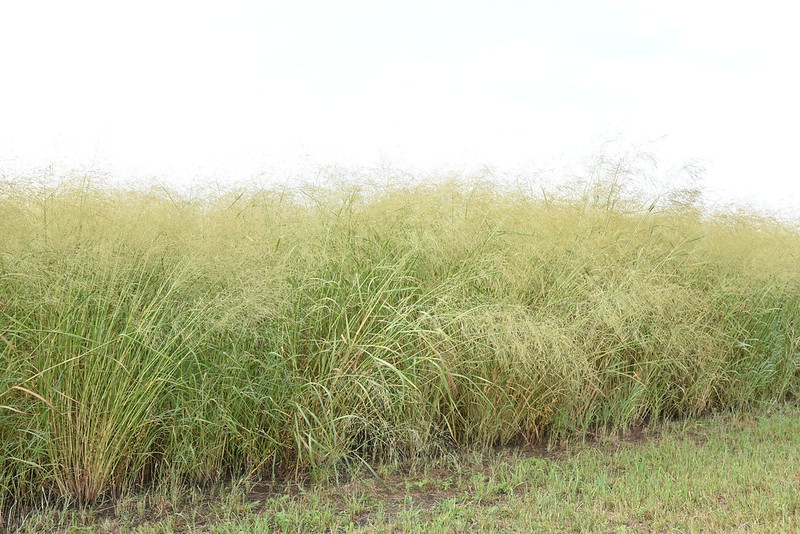 Perhaps the most promising biofuel candidates are perennial grass species. These hardy plants such as miscanthus, switchgrass, and biomass sorghum are known for their high yields, low management requirements, and impressive root systems. These traits allow the grasses to thrive, even on poor-quality land, utilizing areas that are not optimal for conventional food crops. Additionally, perennial grasses can be buffer strips between cropland and natural waterways, where their extensive fibrous root systems protect waterway banks from erosion and filter fertilizers from field runoff water. Perennial grasses also support greater biodiversity and provide ecosystem services like nesting material for native birds. Where does the biofuel come in, you may ask? Well, the above-ground growth of perennial grasses can be harvested and processed into biofuel. The roots are left intact, so the next season the grasses can produce new above-ground growth — no annual planting required.

Even more biofuel technologies have been proposed, from farming algae to raising orchards of fast-growing trees. At this point it’s tempting to say, “Sounds great, problem solved!” and move on to other issues. Yet there’s good reason why most of us are still trapped in a gas-guzzling lifestyle instead of rolling to work via Mother Nature’s homemade petrol. Besides the fact that current biofuel production rates are insufficient to meet present energy demands, the bitter reality is fossil fuels are more convenient. Because infrastructure for fossil fuel transportation, processing, and distribution has been well-established for generations while novel biofuel crops are still in the early stages of building supply chains, fossil fuels are currently easier and cheaper to produce than biofuels. Additionally, fossil fuels consume less water during processing than biofuels, and the difference becomes even more dramatic for biofuel crops that require manual irrigation. On the surface, biofuels seem like an obvious answer to climate change, but closer investigation reveals there are issues to be solved first. As my bioenergy professor often reminds us, “There are no silver bullets!”

Those of us in STEM know this multiplication of problems happens frequently. It’s frustrating to think you’ve discovered a solution, only to open Pandora’s box and release a plague of new problems. Meanwhile, every year that passes without significant change in our societies’ fuel consumption makes the climate situation more difficult to navigate for present and future generations.

What’s the way forward? When perennial grasses get chopped down, they grow back anew, and that’s how we need to approach our dire future. Even during discouraging times, we must continue researching biofuels and other solutions, too. There are no silver bullets for the wicked problems of climate change and finite resources. Still, with each new idea we explore, we learn about the tools at our disposal and how to optimize them. No single biofuel crop is perfect for all situations, but their diversity of traits means there are optimum species for each region of our diverse planet. Switching from fossil fuels to biofuels may mean inventing infrastructure from scratch, but that also means a fresh opportunity to build a brand-new system.

That new system is being steadily established thanks to the hard work of the U.S. Department of Energy’s Bioenergy Research Centers. There are four centers of this kind, and one is right here on campus: the Center for Advanced Bioenergy and Bioproducts Innovation (CABBI). The University of Illinois Urbana-Champaign is playing an active role in growing the biofuel industry out of its infancy stages.

Biofuels are an exciting topic, but they are only one piece of the puzzle to addressing climate change. If you’re passionate about these problems and projects, know that there is plenty of room for you at the workbench. You don’t need to be in the bioenergy field to contribute — simply talking to others about these ideas can inspire new solutions and garner public support. Together we can keep moving bioenergy science and climate action forward.

Kayla Vittore is from Belvidere, Ill. She is a senior studying Plant Biotechnology and currently works at the Sarah Refi-Hind Lab investigating vegetable pathology. Starting Fall 2022 she will be pursuing a Ph.D. in the Crop Sciences Department under Professor DoKyoung Lee, researching the use of perennial grasses as feedstock for industrial application.

This article was the Op-Ed category winner in the 2021 Janelle Joseph Environmental Writing Contest.