Life abounds on Earth, from the boiling acid pools of Yellowstone to the pressure-cooked fish of the deep-sea Mariana Trench. But in my experience, there’s one type of place devoid of all life, one that humanity creates. Burn zones. Flowers still grow in Chernobyl. But in a burn zone, everything is gone. These zones are spreading as the planet heats up and humanity’s influence spreads tendril-like deeper into the wilderness. 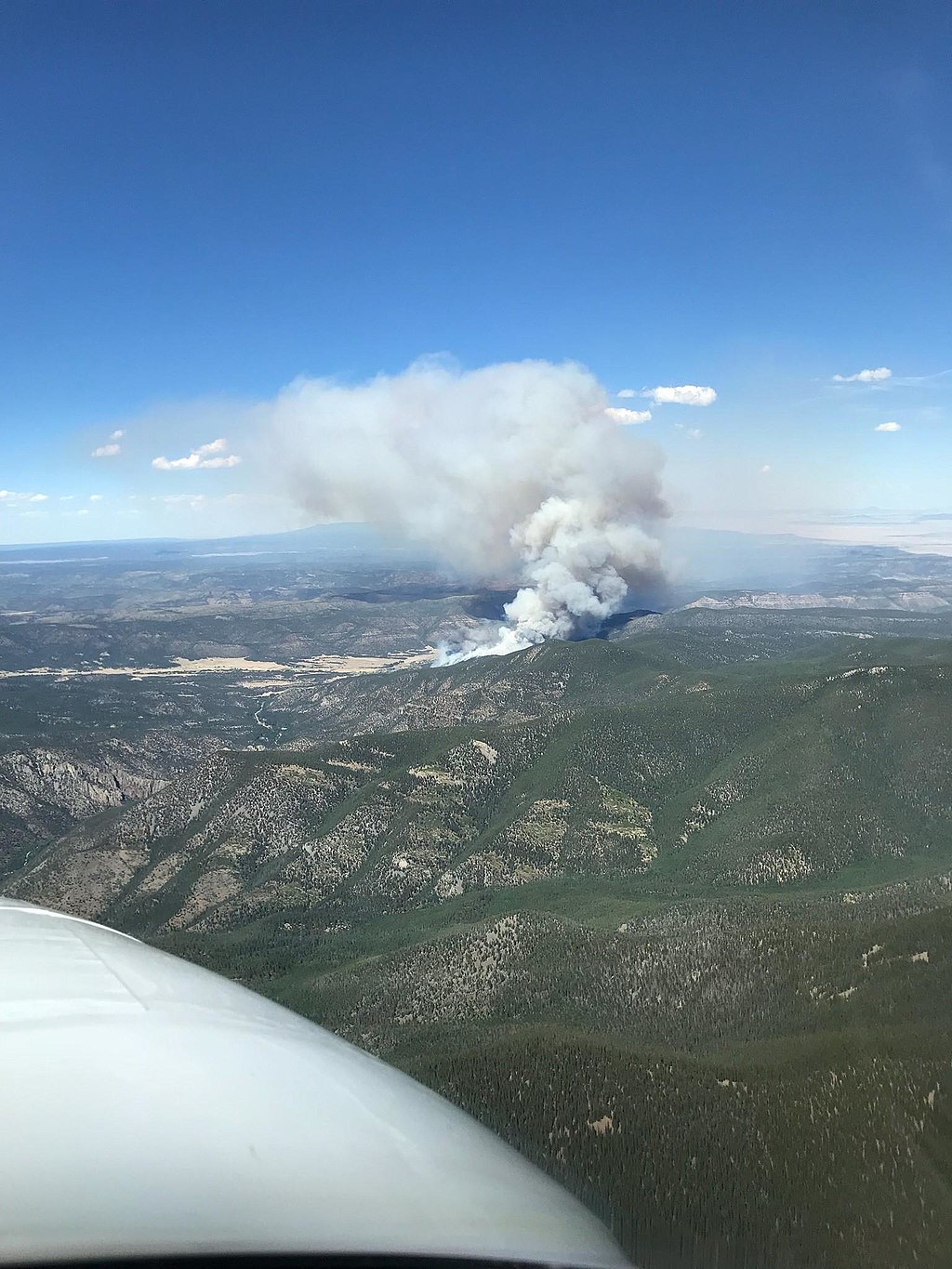 From May 31 to June 19, 2018, the Ute Park Fire consumed 36,740 acres and burned 12 structures at Philmont Scout Ranch, N.M. Pictured: the wildfire as seen from the air. Credit: U.S. Forest Service via Wikimedia Commons

In the summer of 2019, I worked in New Mexico at a Boy Scout camp, Philmont Scout Ranch, in a place called Hunting Lodge, nestled in the pines near a manmade reservoir and about halfway up a river valley. On one side was a steep rockface leading up to a ridge, and on the other were more water-hewn gaps in the mountains. But just over the ridge behind my campsite was a burn zone: shell-shocked land left over from an out-of-control wildfire the previous summer. Years of fire suppression had built up a residual carpet of fallen wood and organic matter that fuels the worst sorts of blazes. An electrical box had shorted and sparks turned into flames that exploded into a raging wildfire. It lit up the night sky for a week across thousands of acres, almost all of it owned by Philmont. According to eyewitnesses, the fire was hot enough to cause trees 20 feet from the flames to spontaneously combust. It scorched a space right through the middle of my summer camp and left nothing behind. Even the dirt turned sterile.

We arrived at an eerie scene. Thousands of acres of land hung just north of us, out of sight behind the ridge. A corpse of earth, left behind by the fire, lay just on the other side of the cliff that had stopped the fire from reaching Hunting Lodge. The stone was too steep for the heat to consume its way across. That thin strip of projected rock marked a weird border: on one side stood a standard Southwestern alpine forest, tall trees and scrubby grasses; the other looked like death incarnate.

Officially, Philmont staff and campers were never allowed to go into the burn zone. Any trespassing by unauthorized persons over that very clear line was grounds for expulsion. There were good reasons for this. Once the plant roots have been burned, the soil is loose, and every hill is only a rainstorm away from sliding away. Without tree cover, the sun beats down like an anvil and heat stroke becomes an ever more serious risk. The burned, blackened husks of trees can fall at the slightest wind, as their supports are no more than char. And stepping on the fragile ground diminishes the already slow process of natural remediation.

This is what the western American wilderness will increasingly come to resemble after 2020, a year of pandemic, racial reckonings, hurricanes, and out-of-control blazes. While I have not experienced all-consuming fire like that near Philmont firsthand, the aftermath was more than enough to make me stop in horror at the spectacle of unforgiving destruction. If one fire in a relatively out-of-the-way area could do so much damage, who can fathom the destruction caused by hundreds of these fires year after year across the West?

At Philmont, my coworkers, now my friends, and I walked into the burn zone in defiance of the rules. We had to see what it was like, how dangerous it was. We hiked up over the ridge to see the specter that had haunted us all summer, and we stood on the cusp between life and death. The burn was a sandy beige and not much else. Gnarled stumps of trees, blackened to a crisp, dotted the landscape. Everything else had been blown away in the wind.

And it was the wind that I remember hearing most clearly. On our hike up to the ridge, we had been greeted by the odd bird call from the brush and an incessant thrum of insects, but on reaching the burn, it all stopped. Not a single whistle. Just the wind, sighing ghost-like through the dead trees. Behind us, in the transition between trees and burn, the underlying drone was of the hardier bugs that could survive between worlds. But the burn zone had an empty, melancholy feeling. I’d never heard the wind so clearly.

We walked a little bit farther into the burn, testing our luck. The once much-traveled path was now indistinguishable from the miles of rocky emptiness between us and the horizon. The edges of the trail crumbled away beneath our feet, falling down the gentle slope into the valley below. The larger rocks thumped against the tree husks as they fell. Everything was dead. It was easy to imagine that it went on forever, that just over the next hill was more burned forest, that my friends and I had stepped back in time 2 billion years, before there was anything but rock and fire. 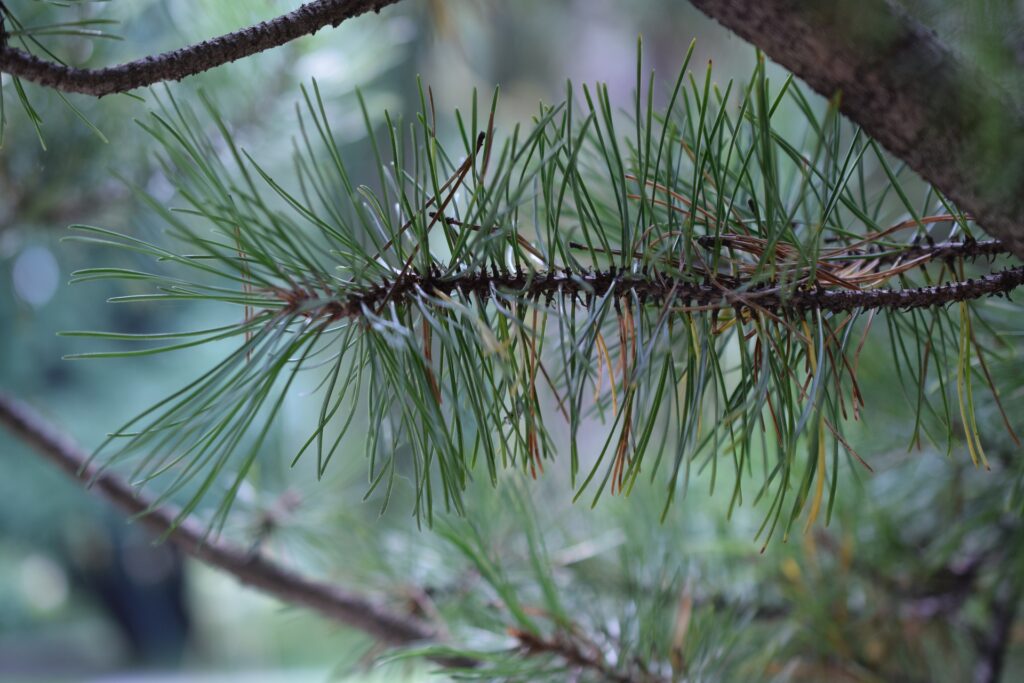 But a more apt analogy might be that I had stepped forward in time, if current trends continue. Millions of acres burned, burning, and destined to burn. Fire is natural, yes, and part of the reason things are so bad is because for generations the consensus among forest managers had been to suppress fire. But it’s more than that. It’s our planet’s rising heat; incessant, unending, increasing heat. Maybe climate change will cause other places to become colder or wetter, but out west, it is going to get much hotter. We’ve been smoking in a house without windows for 300 years.

My friends and I sat for an hour or so on that New Mexican ridge, talking of what our workload might look like for the next day, discussing our performance review, wondering when the next shipment of chocolate chip cookies would arrive. And we came up with new answers for when our campers asked about the burn. Usually, we guided them to the nearby forestry program that explained all about fire suppression and the difference between natural disturbance and unnatural extremes. As we talked, the energy of the sun blanketed us. Then the sun dipped behind the stone walls and we were in the cool shadow of the ridge. The burned valley below lay exposed to the wind and the dark.

We left, eventually. I felt much safer among the green pines, the bark that smelled like butterscotch and vanilla, and the birds that sang as they flitted between the branches. It was a peaceful, lively world on the other side of the ridge compared to that desolate loneliness just above us. And being back in the trees made it easy to practice a type of willful ignorance. To just pretend the burn wasn’t there.

More than a year later, in September 2020, I was lucky enough to participate in a prescribed burn for a prairie plot in central Illinois. A friend of mine invited me along, and I was grateful for a different perspective on fire. Here fire was not a tool of destruction but of life, carefully managed to raze just the necessary zone and breathe new vigor into crowded grasses. But even in the context of fire as a useful, cleansing entity, its power was nearly unbearable.

I was given the opportunity to haul one of the water backpacks to keep the backburn under wraps. My responsibility was to stand by the edge of the flames and make sure nothing jumped the boundary. The flames were just a few inches high at a time, crawling along a dried-out, mowed-over road, but they were blindingly hot. I was sweating under my fire-retardant leggings and crying from the ash in my eyes. The smoke caused me to sneeze so many times my cloth virus mask became soggy. It was awful, and that was just the beginning of the burn.

I’ve heard of prairie flames reaching 30 feet in height, flying across grasses faster than you can run away. But as forceful as these Midwestern flames can be, what happens out to the west is much more intense. Entire trees ablaze, crowns of needles lit up to infinity, waves of heat intense enough to melt plastic and explode brick. The American West’s burns are uncontrolled, chaotic, and destructive, the antonym to my controlled burn on the prairie. We’re pumping the bellows of climate change ever stronger on these new flames. We’re making more burn zones.

In a burn zone, nothing lives. The surrounding wilderness slowly creeps back into place, skin covering the wound, but healing takes years, even decades. The earth mends on a scale of generations, and the scar endures longer than humanity can even know.

At both Philmont and the Illinois prairie, I was grateful that I could leave the burn and go back to the regular world. But I wondered at the random chance of it. It was an accident of geology that had saved my small camp, and it was practical ecology that limited the spread of the prairie fire. I didn’t realize it at the time, but Philmont’s burn zone had scared me. A burn zone is no natural feature; it is devoid of life and growth, an alien space. Maybe prescribed burns are an antidote to that, a way to clear away the ground cover and channel our human need for control into something that won’t blow up in our faces. But our grasp on such things is loose at best. Even prescribed fires are an exercise in limited control; managing fuel and planning for windspeed. Once a critical mass is reached, the fire itself is untouchable.

As the West Coast has gone up in smoke, it has become clear that, despite driving animals to extinction, despite converting the prairie and the tundra to agriculture, despite thinking that we are masters of this planet and everything on it, there are things we will never be able to control. There are things we are only able to try and guide. Do we pay attention to the warning signs? Take climate change as seriously as it needs to be taken? Or do we let it go and see what happens? Light a match and flick it into the grasses. Maybe it won’t catch.

Perhaps that’s our planet now. A lively space built atop a funeral pyre, waiting for any spark to ignite and devour it until nothing remains but the cold, ashy fingers of trees and shards of stone rising in the distance. Happenstance lights the spark, but humanity fuels the fire.

Andy Sima studies Environmental Sustainability and Creative Writing at Illinois, where he will graduate in May 2021. He plans for a career as a writer or with the National Parks System. Currently, he is applying for graduate school in Geographic Information Sciences and is looking for an agent to represent his novel. He maintains a blog at owlmanandy.com.