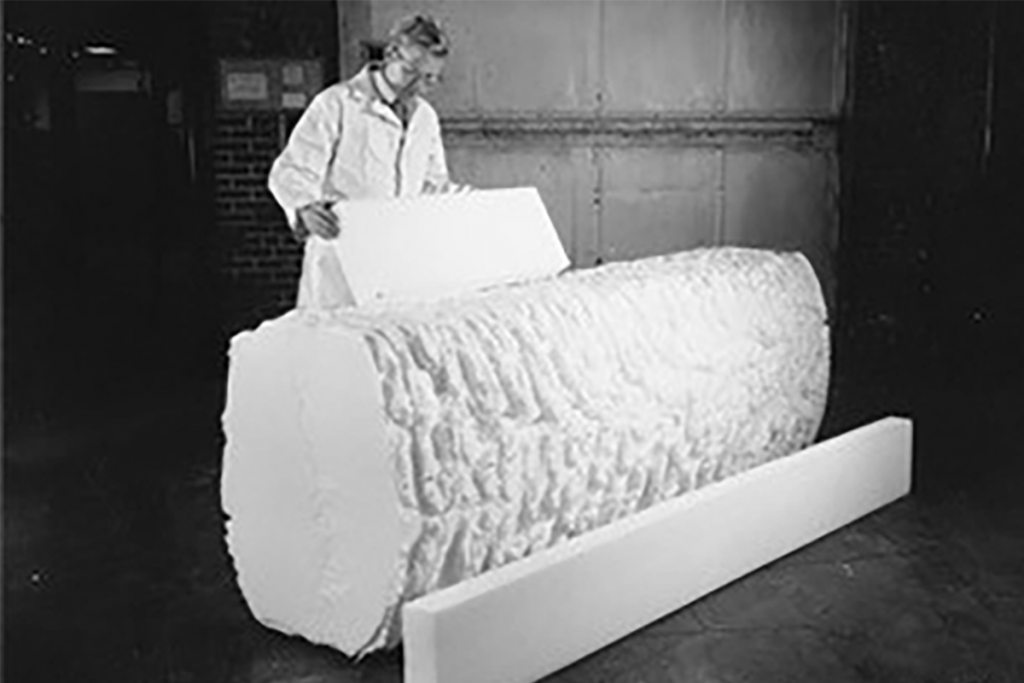 Despite having eaten what felt like a three-course dinner, the remaining food on my plate could have sustained another full-grown adult entirely on its own. Portion sizes in Eureka Springs, Ark., are no joke. I glanced at my uncle’s plate across the table; it looked about the same. So, when our waitress came by to ask if we needed takeout boxes, I reflexively answered in the affirmative, feeling a rush of pride at my conscientious avoidance of food waste. Our waitress soon returned with two blindingly white Styrofoam containers in hand, and I began the difficult task of coaxing my food into its new residence. On locking the tabs together, the material emitted an unbearable squeaking sound, worse than nails on a chalkboard. But when our waitress offered my uncle a box of his own, he stopped her in her tracks with a brisk, “No thank you, I don’t need one,” and produced a brown paper bag from what seemed like thin air. “For the compost pile,” he added, in response to our waitress’ baffled expression.

My uncle lives as far off the grid as possible. He doesn’t have an email address, or use the air conditioning unless the temperature is pushing 100 degrees, or buy produce unless it’s locally grown. What he does have are two compost piles, 18 hummingbird feeders, and a dog named Cat (last name Stevens). So, I reasoned, this was definitely not an out-of-character move. But, as I stood there clutching my container and looking forward to the leftovers I would probably never eat, I couldn’t help but wonder what exactly was so terrible about the innocent white package my uncle wouldn’t stand for in his home.

Even as that thought flitted across my mind, millions of barrels’ worth of petroleum were being stripped from subterranean veins in Venezuela, Mexico, Canada, Nigeria, Saudi Arabia, and the U.S. itself. In an average day, the United States produces roughly 14 million barrels of petroleum while importing well over 10 million. From this massive haul of petroleum come the chemicals ethylene and benzene, which combine to form styrene, a building block of the plastic polymer polystyrene. Based on this long family genealogy of chemicals, compounds, and heavy production, it should come as no surprise that the U.S. Department of Health and Human Services deemed styrene carcinogenic in 2011, and that it has been banned from college campuses, communities, and even entire cities like Portland and San Francisco. Despite these concerns, polystyrene – the plastic patriarch of this long and toxic equation –  is used by millions of people each day. Not only that, but it routinely comes into contact with our food and beverages. Why do we let this happen, knowing what we know about styrene? It’s easy: once it’s wrapped up nicely and given a new, trendy name, expanded polystyrene is no longer viewed as a rogue chemical, but an integral part of our daily routine of food convenience. 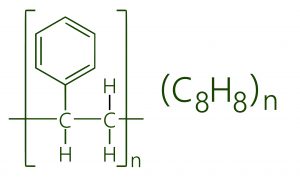 Despite our daily interaction with polystyrene, our understanding of its history is vague at best, most notably its relationship to Styrofoam. While Styrofoam is indeed “a brand of expanded plastic made from polystyrene,” brand is the definition’s operative term. That’s right: Polystyrene products are almost 100 years senior to the relatively recent Styrofoam, a single brand name nestled beneath the polystyrene umbrella (think Q-tips®, BAND-AID®, Jacuzzi®, the list goes on). Ironically, the product we think of as unquestionably synthetic was derived from nature’s poster child: the tree. In 1839, German scientist Eduard Simon made the accidental discovery of a Turkish sweetgum tree’s resin — called storax —to derive a plastic-like substance he christened “styrol oxide.”

The Berlin-born apothecary was able to do little other than isolate the material at the time; it took the research of early 20th-century scientist Hermann Staudinger to give context to the discovery. Staudinger, whose “pioneering work … greatly contributed to the development of modern plastics,” prompted the realization that “Simon’s discovery, composed of long chains of styrene molecules, was a plastic polymer.” Corporations were quick to harness the power of the polymer and distribute what was fast garnering a reputation as a miracle product. Germany’s I.G. Farben piloted polystyrene’s mass production in 1930, and in the U.S. the Dow Chemical Co. followed suit.

The sun had not yet set on polystyrene’s evolution in 1941 when Dow scientist Ray McIntire advanced the durable but brittle polymer one step more with the invention of extruded polystyrene foam (XPS). In the tradition of McIntire’s sweetgum-studying predecessor, his discovery was “purely accidental,” and “came about as he was trying to find a flexible electrical insulator” to help the war effort. Though serendipitous, McIntire’s breakthrough was astronomical in terms of usability — XPS was buoyant, waterproof, and resilient to the point that “it was …adopted in 1942 by the Coast Guard for use in a six-man life raft.” 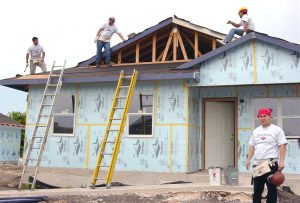 When Dow officially trademarked Styrofoam in 1946, it referred to something very specific: closed-cell XPS used for home insulation and known colloquially as “Blue Board” because of its characteristic hue. An archived DOW webpage explains that “today, the Dow STYROFOAM brand includes a variety of building materials … pipe insulation and floral and craft products.” However, the same page is quick to rebuke the misconception that every foamed polystyrene product on the market is associated with their brand, and emphasizes that “there isn’t a coffee cup, cooler or packaging material in the world made from STYROFOAM.”

The tendency to use a brand name in place of a specialized product is quite common (have you ever asked for a “Sharpie” instead of a “permanent marker”?), to the point that the malpractice has a name: “genericide.” The term’s ominous-sounding nature isn’t that far off — by remaining ignorant of the difference between STYROFOAM and foamed polystyrene, we run the risk of misdirecting our environmental energies and negating efforts to make the world more sustainable. STYROFOAM home insulation products are not the enemy here.

For example, through their sponsorship of Habitat for Humanity, Dow’s “rigid blue board helps builders meet energy codes while lowering gas and electric bills.” According to an article from Plastics News, “over the 50-year assumed lifetime of a building, the energy Styrofoam saves is more than 30 times the energy it takes to make it.” In fact, Dow has made a concerted effort to keep its brand from being sullied by well-intentioned polystyrene challengers. According to an article from The Washington Post, Dow employs “a public affairs staff to keep tabs on the high-profile misuses of the term, and consultants who monitor major media outlets.”

The issue, then, lies not necessarily with Dow’s STYROFOAM, but with the infamously ubiquitous expanded polystyrene foam (EPS) convenience products. While its minuscule foam beads differentiate EPS from its insulating counterpart, the two materials have the same polystyrene foundation. And while indestructibility is useful when constructing bullet-resistant life rafts or efficiently insulated homes, the same cannot be said of coffee cups. It might seem attractive to drink from a cup that was borne of the need to be bulletproof, but ultimately, all we really require is a receptacle to get our beverages from here to there. Because once we’ve polished off our leftover hamburgers, drained the last dregs of coffee, or shaken the last few packing peanuts from our online purchases, we cast the once-revered polymer unceremoniously to the wayside. Polystyrene: the product that requires countless chemical modifications to achieve the perfect level of chemically-clean-but-not-dangerous; the product whose base materials people in developing countries risk their lives to obtain each day, but which is doomed to rot in landfills without a second thought.

But sadly, the truth is that EPS won’t rot. It was specifically engineered not to. The qualities that make it such a valuable commodity — waterproof, resistant to mold and acid, clinical levels of sanitation — are the same that render organic decomposition nearly impossible, leaving discarded polystyrene to pile up in landfills already filled to the brim, and steadily leach chemicals into the environment. 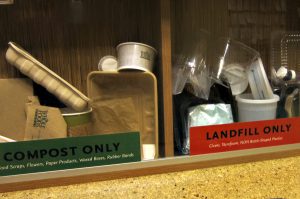 So, the question remains: What do we do? The least invasive option is to recycle — theoretically, this allows us to continue using EPS products guilt-free at our current rate. However, recycling polystyrene is far from painless and nowhere near sustainable. On most plastic products, you’ll find a small number surrounded by the three signature arrows that denote best practices for recycling; if the item is polystyrene-based, it will sport a tiny number “6.” According to the Natural Society, Plastic No. 6 is often recycled into “egg cartons, vents, foam packing, and insulation”; however, polystyrene is as resistant to recycling as it is to decomposition, and can “(pose) a health risk, leaching potentially toxic chemicals, especially when heated. Most recycling programs won’t accept it.” Often, recycling plants can’t accept it: According to HowStuffWorks.com, “new EPS is always needed for coffee cups and plates.” Most times, it’s just more economical not to recycle at all, and to churn out new batches of polystyrene to meet the growing demand. In the end, however, the best option might just be to opt out of polystyrene altogether. Maybe an addition to the traditional “three r’s” is in order: Reduce, reuse, recycle, … refuse? 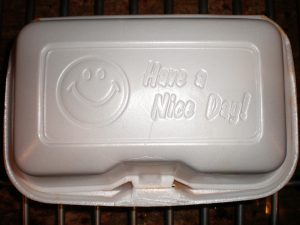 Owing largely to ignorance (and probably laziness), the takeout box I briefly agonized over on that day in Eureka Springs was not recycled or refused. As predicted, I did not finish my leftovers, opting instead to throw away the container in the garbage can immediately outside the restaurant from which it came. Months of production, years of research, culminating in less than 10 minutes of fruitless usage. From the dingy garbage can, full of grease-stained napkins and patterned with wads of chewed gum, the box will likely be transferred to a dump. It will remain in the spot where it lands for the next 500 years, undiminished, blindingly white like a spot of manufactured snow among the mounting piles of trash. If a Styrofoam box squeaks in a landfill and there’s nobody there to hear it, does it still make you want to claw your ears off?

Even more stomach-turning is the realization that, whatever sound my takeout container makes, it will still be audible to your great-grandchild’s great-great-grandchildren.

Jenna Kurtzweil is from Inverness, Ill. She is a senior in English and a Communications Intern at the Institute for Sustainability, Energy, and Environment (iSEE). She hopes to pursue business or marketing writing and is passionate about the environmental nonprofit sector. This article was written for ESE 360, the introductory CEW course, in Spring 2018.