On the 320-acre Energy Farm at the University of Illinois, postdoctoral researcher Ilsa Kantola studies soil. She’s interested in its chemical compounds, organic materials, acidity, and crop yield. With the help of a 16-person research team, powdered rock, and a little boost from chemistry, the field she’s working on might soon be proof that agriculture — one of the biggest contributors to runaway atmospheric carbon emissions — could become one of its most unlikely solutions.

Each year, intensive agriculture makes up 14% of annual global greenhouse gas emissions. But, as Illinois Plant Biology Professor and project co-investigator Evan H. DeLucia explains, “one of the challenges we face as a society is that we can’t just make dramatic reductions to our emissions. Since carbon dioxide (CO2) and greenhouse gases have such a long lifespan in the atmosphere, we have to come up with ways of pulling it down or absorbing it.”

One method for absorbing excess carbon is a naturally occurring phenomenon called rock weathering, whereby carbon-rich rainwater reacts with rocks to form a carbonate precipitate. On its own, it’s responsible for sequestering nearly half a gigaton of carbon a year. Applied on an industrial scale to farming, it has the potential to displace much more.

“The concept of integrating farming crops with rocks wasn’t new; it’s a process that’s been used for ages,” Kantola says. “But the idea that it could be used as a large-scale initiative to remove carbon emissions from the atmosphere? That’s where we think there might be something.” 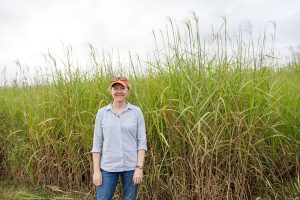 For hundreds of years, rocks have been applied to crops to revitalize barren soils. Overused fields are more likely to have higher concentrations of metals — a hindrance to plant growth and soil fertility. If left alone, acidic soils can enter a downward spiral, becoming barren and incapable of producing any yield at all.

For generations farmers have used crushed limestone on their fields to create a chemical reaction that restores acidity to the soil and promotes growth. But what if that reaction could be sped up to expedite weathering — and do so in a way that displaces carbon?

Enter basalt, Earth’s most abundant bedrock that also happens to be one of the most effective rocks when it comes to weathering.

At Illinois, the team is modeling agricultural fields to gain insight into basalt’s effects on soil in the Midwest. By grinding basalt into a fine gray powder, its surface area is increased to maximize its reaction with rainwater. The crushed rock is then poured over fields of corn and miscanthus at a rate of 5 kilograms per square meter.

When water vapor and atmospheric CO2 are combined, it creates a weak carbonic acid in rainwater. Then, when this water comes in contact with basalt, it jumpstarts a reaction that reacts with the soil and detaches the CO2.

From there, the CO2 gets passed through the soil and exported into groundwater when it flows through the water cycle: into streams, rivers, and eventually the ocean where it will sink to the floor, out of sight. The bottom line: the Basalt Effect removes carbon from the atmosphere and sequesters it deep into the ocean.

“The main thing we’re looking at is the rate of greenhouse gas production: both carbon dioxide and nitrous oxide (N2O),” Kantola says. “The added benefits to the crop’s growing cycle is another bonus.” 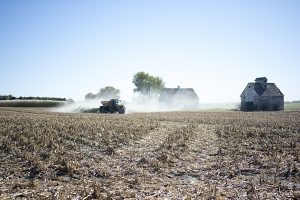 Through just a year of testing, the results of the research have yielded two major findings: (i) Basalt application is reducing N2O emissions, particularly from heavily fertilized cornfields; and (ii) grain yields are increasing.

“After our first year, these are just two results that make us want to do it again and continue the research process,” DeLucia says.

But success is far from guaranteed: “When you’re testing an idea, sometimes the downside is that you can’t get anyone to adopt it even if the results work wonders,” Kantola explains.

How to negotiate the tricky path from concept to commercial adoption? Farmers are already equipped to handle the rocky materials — they have the equipment and knowledge from years of using limestone on fields. Given farmers know how and when to use spreaders, as well as how it benefits their soil, the team isn’t worried about modifying their behavior. The main question on Kantola’s and DeLucia’s minds boils down to one not-so-simple factor: cost.

With the soil science argument made, economists must ultimately step in to determine if the project is feasible. The uncertainty regarding emissions and adoption will inevitably affect the future of the project. Will farmers be willing to pay?

“Economically, we’re going to need to look into whether the benefits, potential carbon dioxide storage and higher crop yields, outweigh the costs of grinding up and transporting the rocks,” DeLucia explains. “I’ve come to recognize that solving these big topics in sustainability are way outside any one discipline. For example, you need engineers and agronomists and economists working alongside plant biologists. It’s not just up to one field of academics to solve these big problems. We have a responsibility to pool our knowledge and work together.” 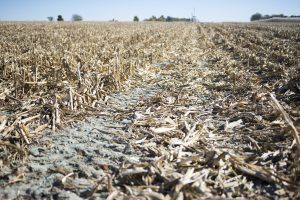 The Illinois project team is part of Leverhulme Centre for Climate Change Mitigation (LC3M). As the five-year study continues, more data will become available that will help researchers make increasingly informed decisions and build a symbiotic relationship between farmers and climate scientists.

“What people fail to remember about soil is that it produces almost everything we need,” Kantola says. “It grows food; it filters water. Our life is sustained mostly from this material we walk on.”

Add to the list: a way to combat the warming of our planet.

Read more about Kantola in a profile by the Institute for Sustainability, Energy, and Environment >>> 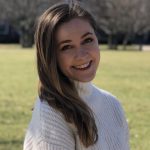 Q Student Editor Katie Watson is from Oswego, Ill. She is a 2018 University of Illinois graduate and one of the first recipients of the Certificate in Environmental Writing. She now works in the university’s Public Affairs office as a Digital Communication Specialist. She lives in Urbana. This article was written for ESE 498 in Spring 2018.