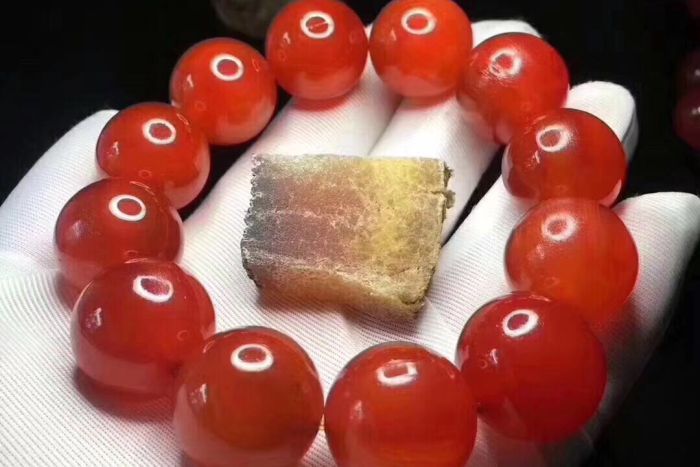 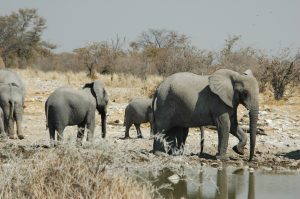 It’s no secret the ivory trade has been historically responsible for the brutal poaching of African elephants. After China banned all trade in ivory at the beginning of 2018, conservationists hoped for decreases in demand for ivory, and life has indeed improved for African elephants.

But as the world celebrates stemming the ivory trade by making it more risky and less profitable, a new, lucrative market has emerged in elephant parts: skin from Asian elephants. This gruesome new trade is centered in Myanmar, one of the three sides of the infamous Golden Triangle, with Thailand and Laos. Elephant dealers in Myanmar enjoy a profitable combination of high supply without shipping costs and an already well-established black market. Their success means that the 2,000 Asian elephants of Myanmar, of a global population of 50,000, are in grave and immediate danger of eradication. “The new skin trade is so serious that if it’s left unchecked, Myanmar’s elephants could disappear by 2030,” believes Christy Williams, director of the World Wildlife Fund.

Beginning in 2014, the nonprofit organization Elephant Family led a full-scale investigation into the Asian Elephant skin trade. Their original focus on the live elephant trade shifted abruptly on their discovery of countless skinned elephant corpses in the forests of Myanmar. Released last April, this 24-page report describes the full dimensions of the skin trade and its impact on Asian elephant populations in horrifying detail.

Every elephant has skin, so poachers in Myanmar aren’t fussy about the type of elephant they target. Male elephants roam alone in the rainforest, while the unprotected herds of female elephants and their calves are simple to quarry. But indiscriminate hunting can be a self-defeating practice, long term. A female elephant is pregnant for almost two years, while her calf isn’t weaned until age three or four. Since elephants don’t reproduce quickly and commit many years and resources to raising their offspring, slaughtering females and babies can mean a fast track to extinction.

The upshot: experienced poachers can wipe out an entire herd in under an hour, meaning the Asian elephant faces an uphill battle to survive. If the skin trade continues to grow, 60 years from now the Asian elephant will not walk among us: It’s nothing short of elephant genocide. 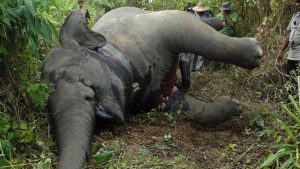 With the newfound popularity of Asian elephant skin, the jungles of Myanmar have played host to unspeakable crimes. Photo Credit: The Elephant Family

To call the killing of Asian elephants grisly would be a criminal understatement. Since the skin is so valuable, crude weapons like shotguns cannot be used. Instead, poachers shoot elephants with poison darts stuffed with pesticide. The poison takes days to slow the elephants’ nervous system. A pack of men stalks the elephant victim until it falls from the intense pain.

While the elephant is still alive, the poachers slide their knives under the skin to separate the fresh blood-filled flesh from the breathing animal. It’s vital for poachers that the fallen animal still has blood coursing through its veins in order to bring to market elephant flesh suitable to be transformed into the sought-after jewelry. Once the prey is skinned, the poachers load their bleeding bounty into wooden carts and leave the bare elephant carcass to rot where it fell.

The Smithsonian Institution tracked the dead Asian elephants to monitor poaching activity, and the results are startling. “In 2010, four elephant carcasses were found in the wild,” states a report on the elephant skin trade in Myanmar released last year. “In 2013, the number was 26 and by 2016, it was 61. So far, government statistics for 2017 record 59 wild elephant deaths and confirm that most were poached.”

While elephant skin holds no known medical benefits, Chinese buyers continue to believe in its ability to treat skin fungi, infections, and intestinal diseases. The false belief in elephant skin medicine is encouraged by major drug companies in China, which stand to gain from the illicit trade. 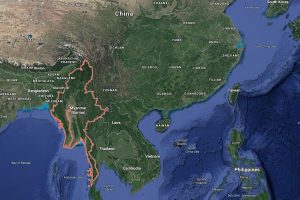 The Myanmar, in Southeast Asia, is home to a vital remnant of the Asian elephant population. Photo Credit: Google Maps

According to the Convention on International Trade of Endangered Species of Wild Fauna and Flora (CITES), commercial trade of any part of an Asian elephant is illegal. However, CITES only monitors international trade so domestic laws and claiming non-commercial uses for animal products serve as loopholes for the illegal elephant skin trade.

Outside of Chinese Big Pharma, raw, dried skin of the elephant is also sold online in different grades depending on whether the buyer is is interested in medicinal or gemstone use. When used medicinally, the elephant skin is crushed into a powder and sold in bulk or 100mg pills. Meanwhile, elephant skin boots, jackets, and other leather clothing items attract high-end buyers.

But while medicinal elephant skin has been traded since time immemorial, it is the booming new market for elephant-derived jewelry that threatens ultimate extinction for the Asian elephant. A unique technique designed to create bracelets labeled as “blood beads” aligns with a recent spike in poaching.

When the Elephant Family investigative report on the skin trade sent multiple undercover investigators to black markets in Asia, they determined that the majority of the new jewelry trade in elephant blood beads actually takes place through online forums.

After creating a stockpile of products, Jaz utilizes multiple platforms, such as Baidu, WeChat, and other Chinese forums to advertise her wares. Scrolling through a macabre online marketplace, buyers can admire images of the blood beads complete with personal descriptions written by Jaz herself.

The website shows different steps in the beading process, offering images of the raw material in different forms in addition to the finished bracelets. In Jaz’s workshop, for example, cutlets of elephant skin are strewn across a cold concrete floor. The photo focuses in on the dismembered mammal, highlighting little hairs poking from the epidermis. Jaz includes the caption “supply is long-term and non-stop” beneath another image holding the skin up sideways to the light. The deep red subcutaneous layer of the recently slaughtered animal glows before the camera’s flash, revealing the fresh blood vessels and nerves. Circles are drawn on the layer, an outline for the artisan to begin making the sought-after jewelry. This square of skin will be cut and folded and rolled into blood beads and the top layer skinned to polish into a pendant before being sold on the black market.

The redder the elephant blood beads, the more expensive and desirable they are. Jaz’s smart marketing techniques have paid off and her business continues to grow. After starting her business in 2014, Jaz, by her own report, can’t meet the demands of her buyers due to her runaway success.

As the products of elephant jewelry dealers like Jaz continue to gain popularity, blood-bead-styled items may become the new ivory. These little balls interring within them stories of such immense pain and suffering are examples of “wenwan” (or “toys of culture and sophistication”) in Chinese culture. The most common forms of wenwan are carved ivory statues and other handmade products. But since wenwan symbolizes education and tastefulness to the upwardly mobile, the growing Chinese middle class continue to find novel forms of wenwan to advertise their status — such as elephant blood beads. Jaz thus faces stiff competition in the blood bead black market. She insists her product is the original and best even as new retailers begin popping up around the web undercutting the price of her blood beads. She uploads photos and updates regularly from the Myanmar-China border, even boasting “I even go to Myanmar and source the raw material myself.”

As popularity for new elephant products rises, Jaz expands her enterprise. In 2017, she posted photos of fresh and dried elephant trunks, with the caption that these were the food of emperors. Invoking the packaged meat industry, her photos variously show “allocating stock” and bulk items “ready for distribution.” When uniquely intelligent, sentient beings like the Asian elephant, already rare, are reduced to “stock” that is “ready for distribution,” an unthinkable extinction can and will happen.

In addition to the thriving online market in Asian elephant skin and its attractive byproducts, the bloody trade can be found in traditional markets throughout the Golden Triangle. In the border towns of Mong La in Myanmar and Xishuangbanna and Guangzhou in China, market stalls display beautiful jewelry in long glass cabinets. Small hand-carved ivory trinkets lined up like toy soldiers decorate the case’s bottom shelf. The lively traders beckon buyers closer through the bustling, loud crowds.

“They won’t send it all the way from Africa. It’s all Southeast Asia. All elephants are from Southeast Asia,” a Mong La trader explains to an undercover researcher. 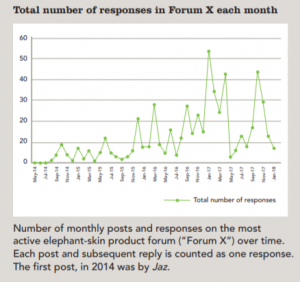 Outside of Myanmar government control, Mong La attracts prostitution, drugs, gambling, and an illegal wildlife trade that brings in avid consumers from around the world. Cutlets of elephant skin rest on open displays while hundreds of skin pieces lie waiting for purchase in back storage areas. Even though the majority of these elephant skin traders offer medicinal remedies, all are aware of the fashionable blood beads hitting the market.

Just over 50 miles away, Xishuangbanna’s traders have begun to develop their own elephant beads. Digging through boxes, a trader pulls out a bracelet with wooden-like beads. They’re rough to the touch and appear nothing like the blood beads; but they tell the same disturbing origin story.

“There is someone in Myanmar who can produce it, but their price is too high,” a trader told the undercover researcher. Unfortunately for them, the blood beads require specific manufacturing techniques that most Chinese traders lack.

In the wealthy city of Guangzhou in China, the distant sounds of seabirds and boat horns echo across the nearby buildings. Crowds of consumers move through jewelry boutiques and medicine shops along the streets, hiding the inconspicuous dealings of the black market.

Elephant skin pieces are hidden away until a buyer shows interest. Unlike the cities closer to Myanmar, traders don’t sell blood beads. The humidity causes the orbs to slightly melt and lose their finish. To make up for this, traders boast of their large quantities of raw skin material.

“I can easily supply 10-20 kg,” a dealer told an investigator. He convinced him of the authenticity of his skin by showing the difference in hair follicles compared to a cow or hippopotamus. Traders confirmed the elephant skin was sourced from Southeast Asia, probably Myanmar.

What, beyond outrage, can we take from the horrifying fate of Asian elephants? If the fashion for blood beads and other elephant skin exotica continues to build, the Asian elephant will be extinct in our lifetime. The fate of thousands of elephants already fallen has been sealed into little, red beads. But the fate of those that remain relies on international action to curb the trade, just as restrictions on the ivory trade have halted the demise of the African elephant.

The motivation to stop this brutal trade relies on a simple enough human act: recognition. Recognition that the shiny red beads are made from blood. That the blood was once pumping through the veins of an elephant. And that these gentle giants have as fundamental a claim as we to live and thrive on this planet.

An elephant never forgets. And neither should we. 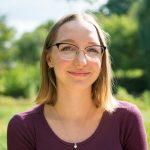 Haley Ware is from Elk Grove Village, Ill. She is a senior in Natural Resources and Environmental Sciences, and works as a lab and field assistant with the Leverhulme Centre for Climate Change Mitigation Project. She aspires to influence U.S. environmental and climate policy after graduation. This piece was researched and written for ESE 498, the CEW capstone course, in Spring 2019.