I found myself in the kitchen one summer day, planning to grab just one more potato chip. As I opened the cabinet door on a bag of Lay’s and some mild guilt, I noticed a speck of coffee grounds in the kitchen sink, an uninteresting sight — save for its rather uncharacteristic decision to climb up the porcelain wall. The curious phenomenon puzzled me for only a moment before I identified the speck, to my annoyance, as an ant. A colony of small black ants had been engaging in covert warfare against my house all summer by invading cereal boxes and sugar bags, but I caught this scout out in the open, hunting for leftovers. Postponing my snack duties, I closed the cabinet and grabbed a napkin to rid my home of another insignificant pest. 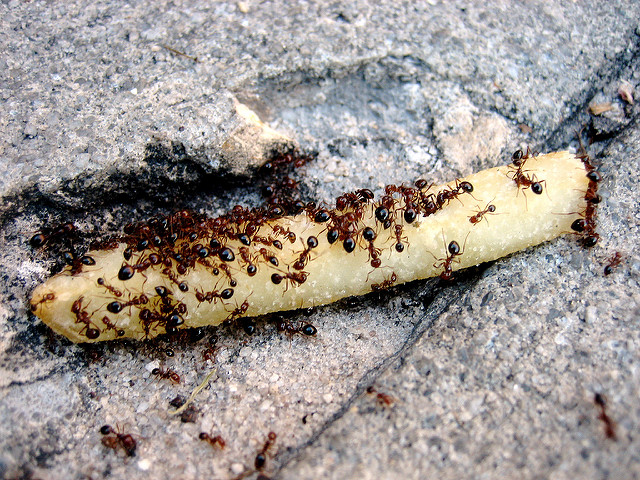 I was moving in to squash my enemy when the ant came into better focus. My napkinned hand hovering, it was no longer a dimensionless pest but a creature with a distinct body: its round head sporting harmless pincers, its thorax sprouting hairlike legs, its plump abdomen contrasting the otherwise sleek insect. As commonplace and meaningless as ants were to me, I suddenly stopped. The thought of squeezing the ant into an organic pulp made me cringe.

Why am I trying to end a life? I couldn’t kill it, not like this. I put down my napkin, but I couldn’t just let the ant escape into my pantry. Frantically looking for other options, I finally washed it down the drain and left both the kitchen and my chips, distracted by a confusing moral dilemma.

If I really see no value in the ant, what stopped me from killing it?

Is it size? It’s immediately obvious that no, I don’t treat giraffes or whales significantly better than I treat my fellow, smaller humans, but there seems to be a hint of truth here. I pay no heed to the single-celled organisms that outnumber me beyond my comprehension, and I devote little more thought to ants and other small insects. Larger animals, like those that draw crowds at the zoo, capture people’s attention and emotions much more strongly, but this seems to be more of a correlation than a direct reason; few people cherish lions or elephants because they are large. There must be something else.

Is it intelligence? Perhaps I instead find value in the intellectual capacity of life. Better cognitive function might mean greater complexity and ability, which are key features in humans. A look at a measure of intelligence used by some scientists called the encephalization quotient (EQ) seems to make some initial sense: Humans are unsurprisingly at the top of the list with an EQ of 7.4, followed by dolphins at 4.5, ravens at 2.5, dogs at 1.2, and so on. None of the animals on the list are small and ignorable like ants and amoebas, but the conclusion still rings hollow. Dolphins aren’t valued four times more than “man’s best friend,” and who really cares for the clever raven over other birds? Intelligence is certainly closer to the truth than size, but the details don’t pan out. Objective measurements might be the wrong approach for figuring out the how we emotional humans think about other creatures.

Is it compassion? Do I value animals I can emotionally relate with? It sure seems like it. Across the world, dogs and cats are closest to our hearts and homes, and we value them nearly to the level of other humans. People have buried their pets alongside other dead people for thousands of years, to take one example. Even beloved animals outside the home like pandas and monkeys are emotionally relatable, especially when they show human-like behaviors like yawning or playing. Ants just don’t provide the same appeal.

And there’s a scientific basis for my predisposition toward these relatable animals. We humans are very social, and both our survival and health have long depended on our relationships with our fellow humans. For this reason, we are excellent at reading the actions and feelings of other people. We’re so good at it, in fact, that we read the actions and feelings of things that are not people, a phenomenon called anthropomorphism.

Philosopher David Hume described it artfully: “There is an universal tendency among mankind to conceive all beings like themselves. … We find faces in the moon, armies in the clouds.”

However, anthropomorphism is experienced most strongly when considering animals that more closely resemble humans. Generally speaking, we relate to mammals better than reptiles, and reptiles better than birds, and so on through fish and insects — indeed, aliens in movies are often given reptilian or insectoid features to achieve an off-putting “inhuman” appearance. While it isn’t a perfect model of our preferences, a quick brainstorm of common pets (dogs and cats) and popular zoo animals (lions, monkeys, elephants, giraffes, and pandas) leads to nearly all mammals for this reason. Far from some physiological objectivity, our animal preference is much more personal: We like animals who look and act like us.

My initial discrimination against the kitchen-invading ant makes a lot more sense with anthropomorphism in mind. Despite this scientifically demonstrated tendency, however, I could feel a different instinctual force at play as I considered the physical act of destruction against the insect. There was something about crushing the ant’s body, these functioning organs and their summation into this creature, that was simply disturbing to me.

I felt that I had a deeper connection to the tiny animal outside of the anthropomorphic bias. There was something about the ant’s very act of living that compelled a sympathetic reaction from me. Some might call this reaction “biophilia”, a concept formulated by ecologist E.O. Wilson that says humans have “the urge to affiliate with other forms of life.”

According to Wilson, having a preference toward living beings is a genetic trait borne from evolution, explaining not only our bias toward mammals but also our love of colorful flowers and nature overall. Biophilia as a scientific hypothesis is currently unproven, but I believe it’s a good starting point to understand my unexpected sympathy toward the ant.

As a being of high complexity, perhaps I see an intrinsic value in all life regardless of form that, like me, exists despite the entropic nature of the universe. Whether an evolutionary influence or simply a factor of being alive, I see some value or beauty in all living things of all scales. To demonstrate, imagine watching an amoeba through a microscope while using a blade to sever its cell membrane and seeing its translucent innards leak out in a depressing fading of life. I would feel a due proportion of guilt for such a death.

Killing the ant would similarly bother me on an emotional level. Even if the ant can’t feel physical pain like I can — although the jury is out on whether it feels its own type — harming life often feels wrong, which is why I lowered my napkinned hand that summer day.

But I still washed the ant down the drain, away from its colony and into the sewage system where it very likely drowned. Regardless of the strength of my affection toward the crawling creature, there are practical limitations in place in order to live my human life. Certainly I can do nothing to save the billions of microbes both inside and outside of my body that die every day because of my mere existence. Even having the civilized bare minimum of a secure living space requires the disposal of harmful intruders, lest we allow nature to take over our homes.

While the moral treatment of animals is a difficult and complex subject, I’m inclined to say my actions were permissible. Ant colonies number in the tens of thousands, and many of its inhabitants leave the nest each day with the expectation that they will not return home. Death has already been built into the script of nature, such as my killing of the ant; despite my appreciation for the insect, we were at odds from the start. Humanity shares the Earth with 10 quadrillion ants, one species never able to defeat the other but always clashing at the boundary of our territories.

So while I may feel more guilty for killing the ant than eating some potato chips, it is my role as a human to have human preferences and needs. Even with our current technology and understanding of the world, my life is filled with evolutionary forces and instincts that influence and justify my actions, including my eradication of pests to ensure idle snacks meet my taste, and cleanliness, expectations.

Zack Fishman is from Park Ridge, Ill., and is a junior in Engineering Physics pursuing a minor in Math and the Certificate in Environmental Writing. He has recently begun writing for The Daily Illini and The Green Observer. This article was written for ESE 360, the introductory CEW course, in Spring 2018.