Getting to the Point

I acquired a huge pen collection in middle school. From the earliest days of sixth grade, I noticed my classmates’ habit of abandoning writing instruments all over the hallways and classrooms. Ever-motivated by the allure of free stuff, I began filling my pencil case with an endless supply of orphaned Bics and Ticonderogas.

Of course, I didn’t need dozens of pens to complete my homework, but I saw unrealized utility in every forgotten writing tool. I couldn’t understand why people thought nothing of losing pens in good condition, on a near-daily basis. Soon my overflowing collection had to be bound by rubber bands to stay together. Only years later as a college student studying sustainability did I come to research the problem of disposable pens —and discover its true scale.

The rescued pens of my youth comprise a mere drop in the ink well of global annual pen sales, which number at least 5.5 billion. A technology that traces back to the ancient Egyptians many millennia ago, pens are now cheap, ubiquitous objects that invade countless schools and offices.

To disassemble the pen supply chain, we begin with the ink, a concoction of dyes and solvents. Its common ingredients are water, alcohols, carbon black, glycerides, and polyvinyl compounds. Carbon black in particular, responsible for the deep black color of most pens, is the most hazardous ingredient because it is produced by burning tar, a process that releases carbon dioxide and many other pollutants.

The ball bearing in the tip of the average pen is made of a tungsten compound. This metal is mined primarily in China and Russia but also in the Democratic Republic of the Congo —the latter devastated by civil war, fueled in turn by the sales of tungsten and other valuable resources. Government and rebel armies fight for control of the mines and force citizens to work long shifts in crippling conditions. Put simply, our demand for an endless supply of pens feeds human rights abuses and war in Africa.

The point that holds the ball of the ballpoint pen is made of brass, a copper alloy, whose mining poses its own environmental hazards. Access to copper is only made possible by open-pit mines, where massive layers of rocky earth are stripped away and processed for the valuable ore. Extraordinary amounts of water and fossil fuels are expended for this extraction. Copper mining causes “Black Lung” in miners and pollutes adjacent rivers with acidic wastewater.

The pen body and cap of a disposable pen are, of course, plastic —a material shaped from crude oil. This oil is extracted by injecting water or gas into the earth to propel the black gold to the surface. The extraction process alone threatens host ecosystems with oil spills and contamination. And the subsequent industrial process that turns the oil into plastic releases chlorofluorocarbons, an extremely potent greenhouse gas.

After their extraction, petroleum and its byproducts are shipped across the world to factories where 170 pens per second are manufactured globally. These gleaming new pens, in their millions, are then transported worldwide to stores and businesses for you, the average consumer, to grab by the handful.

After being purchased, used briefly, chewed and forgotten, the pen is discarded either in a bin or as litter. Whether transported by a fleet of garbage trucks or trodden into a patch of dirt, the pen will persist in the environment for centuries. On timescales a thousand times longer than its evanescent period of use, the disposable pen is always with us, leaching toxins into surrounding soil and wildlife.

Behind every step in the pen’s life cycle lies an enormous consumption of water, fuel, and cheap labor. In the extraction, manufacture, and distribution of pens, as with so many of our daily life supplies, we treat Earth’s resources as endless in supply, low in cost, and without negative flow-on consequences. The pen industry typifies modern manufacturing in its inherently unsustainable and unjust character. 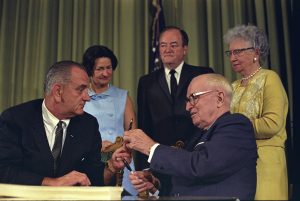 With these issues pervading pen production, what’s an average consumer to do? One alternative is purchasing products that use fewer resources, such as refillable pens that only need the ink replaced or bamboo pens made from sustainable plants. These solutions have limited impact, however; both options still require unsustainable resources to make the other parts of the pens, while the refillables would necessitate a revolutionary attitude adjustment from consumers, who already take advantage of the pen’s disposability.

Truly solving the negative externalities of pen production is not as easy as buying the right product; it instead demands fundamental changes to our manufacturing and consumer mindset. Brass will never be made sustainably until open-pit copper mines minimize environmental damage, and tungsten extraction will always involve both environmental and social hazards. In this sense, the problems of pen production exemplify the unsustainability inherent in most other mass-market products. Modern manufacturing mostly involves environmentally and socially exploitative processes, and eliminating these in favor of a sustainable, equitable production infrastructure will be complex and painstaking.

My pen collection prevented only the most visible litter and waste, and nothing I could have done in middle school could prevent the damage cause in the wake of their production. Yet if the environmental damage attributed to the meager pen cannot be prevented, what hope is there for cleaning up the rest of our economy?

Zachary Fishman is from Park Ridge, Ill. He is a senior in Engineering Physics, with a minor in Math, and is a regular contributor to The Daily Illini and The Green Observer. This article was written for ESE 360, the introductory CEW course, in Spring 2018.