As my dad and my childhood self descend the bluff, the trees on either side of the road break and we gaze upon the vast expanse of cornfields. A tractor sits crooked, its back wheel sunk deep in the mud. A large puddle covers the far portion of the cornfield, transforming it into a lake. I am full of questions: “How are they going to get that out? Why do they plant fields where it floods all the time?”

“This used to be a lake,” Dad explains to me. “They drained the water out to plant crops. But the water still naturally wants to go there.” 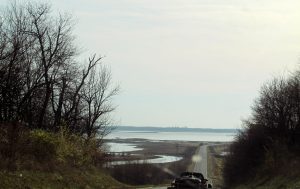 The place in the Illinois River Valley where “the water naturally wants to go” is now known as Emiquon National Wildlife Refuge. Since that day so many years ago, the futility of fighting nature has been realized, and the wetland has been restored.

When European settlement of North America began in the 1600s, many settlers viewed wetlands as wastelands because they impeded travel and couldn’t be farmed. Drainage became the signature of westward expansion. But the truth is, the uses we get out of wetlands are extremely important. And once gone, bringing a wetland back to life is a challenging and complex task.

My family often drove past the Emiquon area on our vacations. Think of your own travels. What do you look for when you need to stop? Most people would look for a place that is clean and safe with plenty of food. Animals are the same way. They have certain basic needs, and healthy wetlands are desirable resting places — a necessity even — for numerous species, many of which are endangered. Consider the plethora of birds that migrate each year. They embark on taxing journeys, traveling hundreds or thousands of miles to reach favorable climates, breeding grounds, and resource-rich habitats. Along the Illinois and Mississippi Rivers, including Emiquon, numerous bird species can be spotted luxuriating in the bounty of wetlands. In winter months, bald eagles can be seen in large numbers. Waterfowl and coots abound. In the summer, one can expect to see hundreds of pelicans, scores of terns and gulls, a variety of herons, and slews of different shorebirds in addition to the many songbirds and birds of prey.

While some birds simply pass through wetlands, others seek them as breeding grounds. Since its restoration began in 2007, more than 260 species of birds have been observed at Emiquon. In fact, Emiquon is listed as a hotspot on e-bird (a monitoring app popular among birders), making the spot a popular destination for nature lovers, as some of the birds are rare. Some species found nesting on the refuge include black-crowned night herons, least bitterns, and common gallinules. Many of these birds have become uncommon sights in Illinois, mainly due to a loss of their habitat. 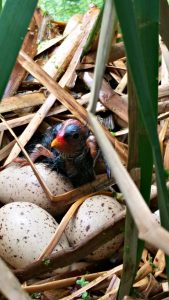 A common gallinule hatching in the Emiquon Refuge.

The restored Emiquon thus serves as a crucial ecological niche and waystation. It supports more than 2% of the country’s American coot population (and more than 1% of the global population), roughly 70% of waterfowl that migrate through the Illinois River Valley, and more than 20 endangered bird species — a feat earning it the designation as a Ramsar Wetland of International Importance. And birds aren’t the only creatures to call the Emiquon home: 35 species of fish have been stocked in its waters, and a wide assortment of invertebrates, insects, amphibians, reptiles, and mammals also play a part in this bustling ecosystem.

What about the benefits of wetlands to us? While so many wildlife creatures make wetlands their homes, the wetlands themselves are protecting our homes from flooding. Imagine a river. When excess water is poured into the river, it will overflow its banks. Wetlands provide a place for that excess water to go. The vegetation slows the flow of the water, lessening the destructive impact. The water then stays in the wetlands and drains at a significantly slower rate. Nature’s sponge would be a good way to picture it.

But development has degraded that sponge effect. Draining wetlands involves the drastic alteration of free-flowing waterscapes by erecting levees, installing drainage ditches and pump systems. Historically, hardwood wetlands could once store about two months’ worth of flood waters, but their decline now only sees about 12 days worth of flood water stored. Worse still, when levees disconnect the river from the wetland, the result is catastrophic flooding. After the levee district at Thompson Lake was finished, high water levels in the river led to more frequent flooding of Havana (the town across the river from Emiquon). Citizens could be heard grumbling about “dynamiting the levee” as a result.

The advantages of wetlands have not always been recognized, and the Illinois River Valley bottomlands were no exception. Emiquon was historically composed of two lakes, Thompson and Flagg, which were drained in 1923. Prior to being depleted, Thompson Lake boasted being the largest, most productive bottomland lake in the Illinois River Valley. Wildlife was so abundant that people could make a living just from hunting and fishing. In the late 1800s to early 1900s, hunters and fishermen flocked to the area for its seemingly endless abundance of fish and waterfowl, gaining a reputation among outdoorsmen as the “inland fishing capital of the world.” It comes as no surprise then, given the size of the lakes and their rich history, how much life was lost when draining took place. Records show that as the lake was draining, 600,000 pounds of fish were pulled from the water while more than twice that amount died.The loss was only one of many that has contributed to the destruction of greater than 90% of the state’s wetlands. The wetland-turned-farm produced rice, corn, soybeans, tomatoes, and cattle for 83 years until the Nature Conservancy purchased it in 2007. 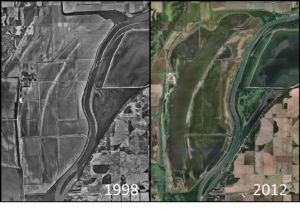 Thompson and Flag Lakes while still in agricultural production in 1998 compared with the restored Emiquon Preserve in 2012. Credit: Illinois Natural History Survey.

Restoring a wetland to its former glory is a highly complex undertaking that takes years to accomplish. Just as the Greek philosopher Heraclitus observed it is impossible to step into the same stream twice, it is also impossible to restore a wetland to its “original” state with exactly the same composition of species, soil complexes, water levels, and nutrients. One of the many challenges facing restorations of any kind is that of invasive species as the climate changes and people, unwitting couriers of invasives, become more mobile. When trying to restore an ecosystem, managers need a plan to deal with invasive species already present, to prevent them from spreading, and to prevent new invasives from becoming established.

Perhaps the most infamous invasive fish, the Asian carp, has made its way into the Emiquon refuge with the flooding of the Illinois River breaching the levee twice in the past 11 years. Plants are no less destructive. Invasive plants earn their name by crowding out native species to create monocultures. Purple loosestrife, phragmites, and curly leaf pondweed are some problematic plants found at Emiquon. Thriving in the face of disturbance, blooming early, and even growing a second time after spring cutting, reed canary grass is an especially troublesome invasive. Removal of an invasive species can take an exceptionally long time, if it can ever be done at all. 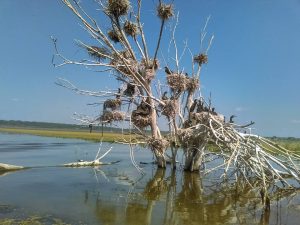 A rookery of double-crested cormorants.

Today, I drive by the area I remember as dismal flooded fields. As I descend the bluff, water glistens in the sun for miles like millions of little diamonds strewn loose. Birds of all sorts fly about, and fish flip their tails as if to say you can’t catch me! The devastation done to our wetland ecosystems during the past 150 years can no longer be ignored. So much natural habitat has been destroyed that we can’t be satisfied with simply protecting the little that remains. Restoration is an absolute must! Refuges like the Emiquon offer a glittering example of how to accomplish conservation goals and create sustainable futures for both ourselves and the multitude of creatures who call Illinois home (at least part-time). As the waters of the Emiquon glint in the sun, so the entire refuge shines like a northern star, guiding us toward nature’s revitalization and our role in ensuring it. 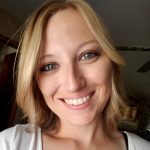 Mallory Shaw lives in Bloomington, Ill. with her husband and 6-year old son. She’s a senior Natural Resources and Environmental Sciences major concentrating in fish and wildlife conservation. Her career (and life) goals are to restore and protect wetlands — and the wildlife dependent on them. This article was originally written for ESE 477, a CEW course, in Fall 2017.