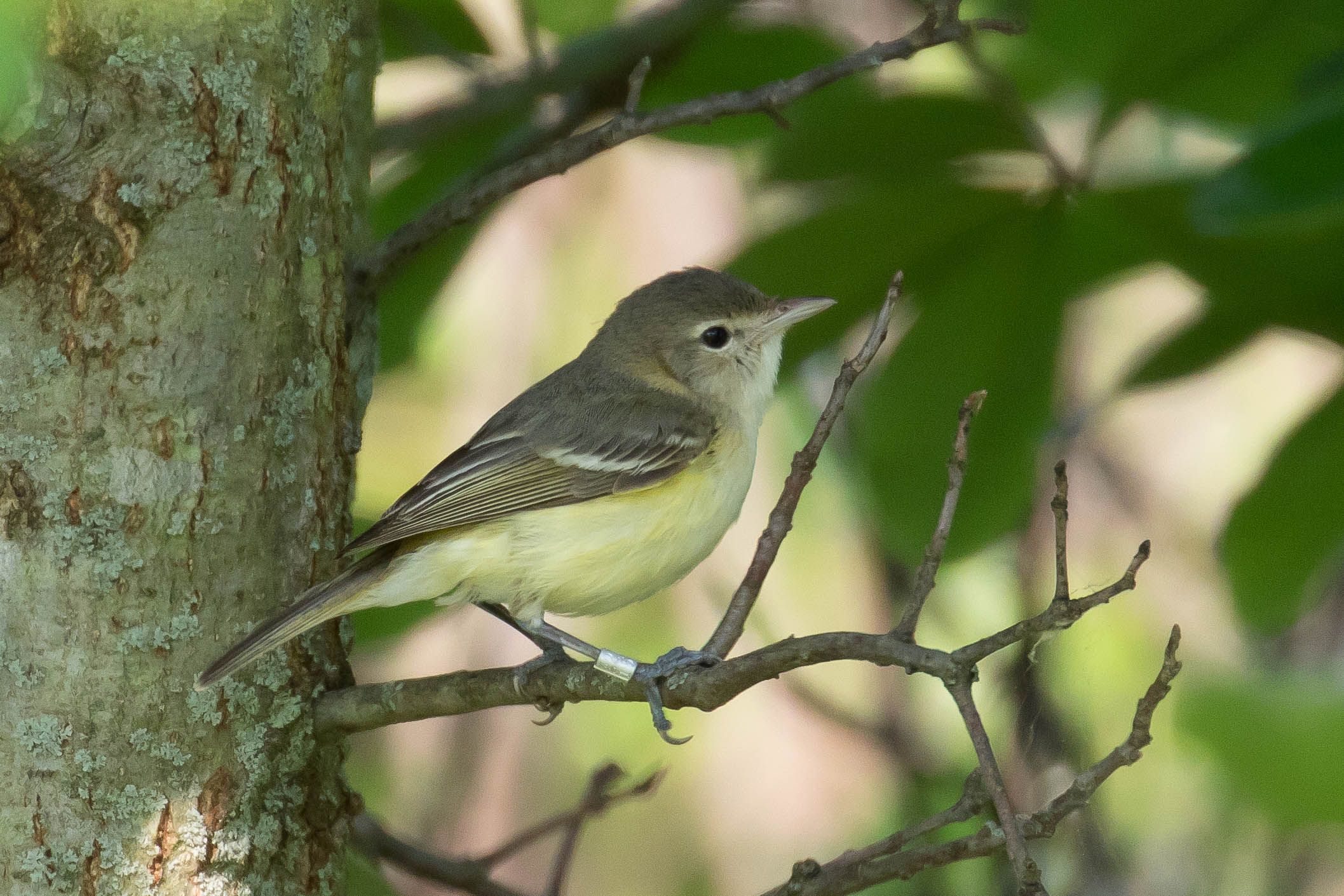 Among the dense shrubbery in a patch of prairieland in central Illinois, a sing-song warbling echoes out from the grass. Partially hidden by the branches of a bush, a bird called the Bell’s vireo energetically chatters its little song. The Bell’s vireo’s body, small enough to fit into the palm of your hand, bobs up and down as the branch sways in the breeze. It takes off, its gray-drab wings excitedly flitting up and down, its yellow-white belly exposed in flight. The bird is off to meet its friends in a neighboring shrub. They’ve been working hard to build their nests as they prepare for their baby chicks to be born. 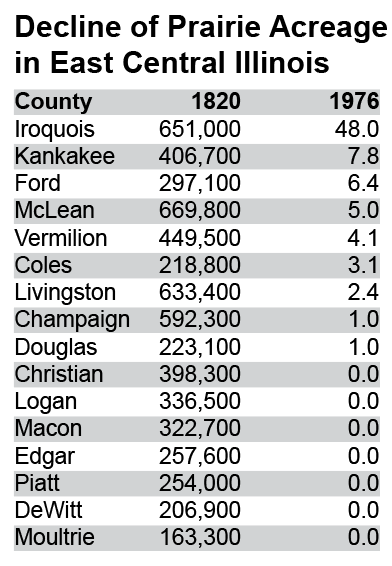 But from the time of first European settlement in the mid-1800s, the prairie habitat the Bell’s vireo calls home grew ever smaller as agricultural demand drove the wholesale conversion of natural prairie into cropland. As is obvious to anyone driving down Interstate 57, the vast reach of Big Agriculture has swallowed up the natural prairie lands of Illinois and their biodiversity.

According to the Illinois Department of Agriculture, nearly 27 million acres are used for farming in Illinois, made up of approximately 72,200 farms. This adds up to 75% of the total land area of Illinois. Not just impressive in its scope, the state’s agricultural industry is highly lucrative, generating about $19 billion annually, with corn accounting for 54% of that profit.

We need to eat, but we also need and love birds. How to balance the needs of farmers and native creatures like the Bell’s vireo in our highly managed modern prairie?

One federal program aims to strike just this balance between agriculture and conservation. The Conservation Reserve Enhancement Program (CREP) focuses on productive land conservation, and is overseen by the Farm Service Agency (FSA). According to U.S. Department of Agriculture’s website, here’s how it works: “In exchange for a yearly rental payment, farmers enrolled in the program agree to remove environmentally sensitive land from agricultural production and plant species that will improve environmental health and quality.” The ultimate goal of the program is to deter soil erosion, protect and reduce the potential loss of wildlife habitat — as well as to refine water quality. 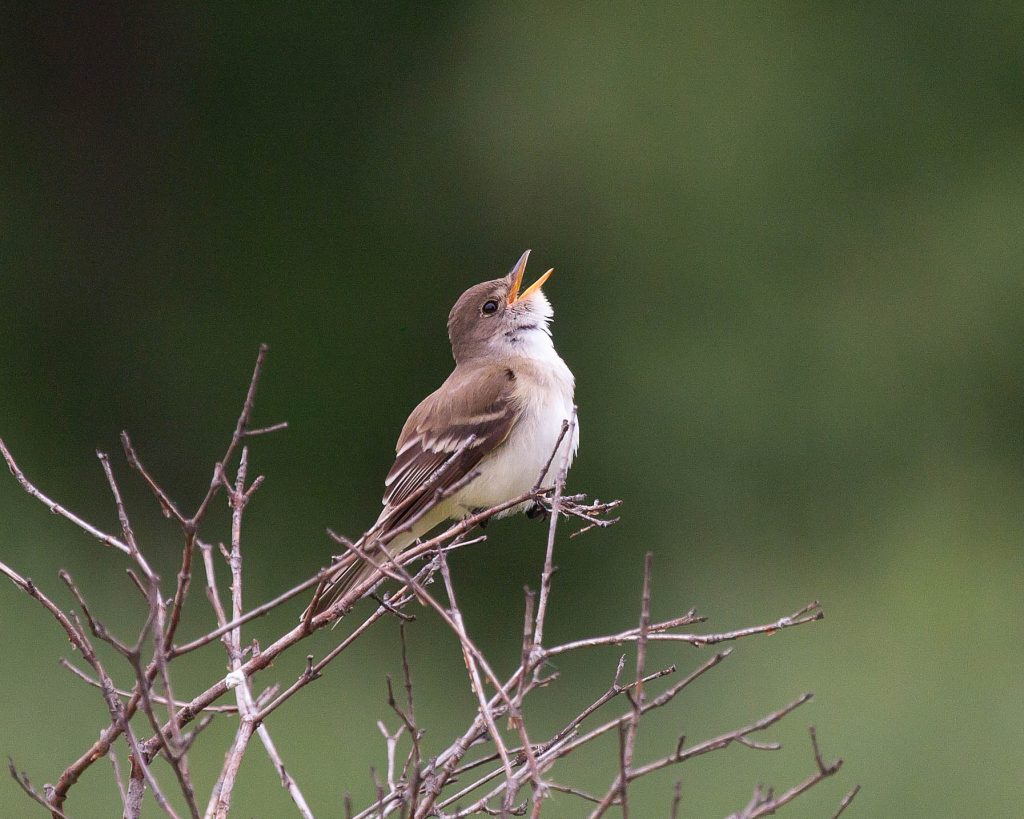 Bryan Reiley, an avian ecologist and former Illinois doctoral student, has devoted four years of fieldwork to researching the impact of CREP on prairie biodiversity. Reiley got involved with this research as a University of Illinois Ph.D. student. He explains that the program “pays farmers to leave land fallow, and turn it into some kind of natural habitat.” The research was conducted in coordination with the Illinois Department of Natural Resources to track the effectiveness of CREP.

Reiley said the birds are easy to track since they broadcast themselves with their chirps and calls, and that it’s likewise easy to figure out population and species variety. “It’s a good proxy for biodiversity,” he said. Reiley and his team examined birds whose populations were declining, then quantified the birds expected to inhabit CREP habitat in the state, and finally utilized a randomized sampling method to extrapolate numbers.

Out in the field, Reiley and his team quickly fell into a rhythm. They would load up their van before dawn, drive out to the prairie, wade through the grasses, then race to the next location to get the best results of bird activity before midday. Once in place, they adopted an appealingly simple method. Team members would stand in a randomly chosen field, and listen and write down every individual bird they heard. Reiley learned how to identify more than 130 species by sight and sound.

There were times where the roads and conditions were muddy, and they would get stuck and have to walk to farmers’ houses to ask for help. In upstate New York, where Reiley is from, farmers would often grow irate with roaming research teams. But this was the Midwest.

“Almost every person in Illinois was always nice,” he said. “If they couldn’t help you with moving your car out of a ditch they would go out of their way to find someone who could help.” Despite all the driving, the mud, and an unfortunate incident where he got stung in the face by a bald-faced hornet, Reiley found being out in the fields conducting research to be very rewarding. Bell’s vireo, for example, build their nests relatively low to the ground in shrubs, and by following the bird calls, he could find their nests. Sometimes, he would find a male Bell’s vireo singing his little song while incubating tiny eggs.

The Bell’s vireo provided a ray of hope to Reiley and his team. Their most surprising finding was that the Bell’s vireo has experienced the highest recent upsurge in population numbers, even doubling their numbers — a stark contrast to their long historic decline. Pondering the data, Reiley believes the increase in the Bell’s vireo population in Illinois has been due to land conservation efforts.

“We found that private land conservation efforts in Illinois are probably effective in achieving state population goals for some rare species, such as the Bell’s vireo, which prefers shrubby areas near grasslands. They also may help other species with similar habitat needs, like the willow flycatcher, which we estimated to be at 92% of the goal,” Reiley told the University of Illinois News Bureau. 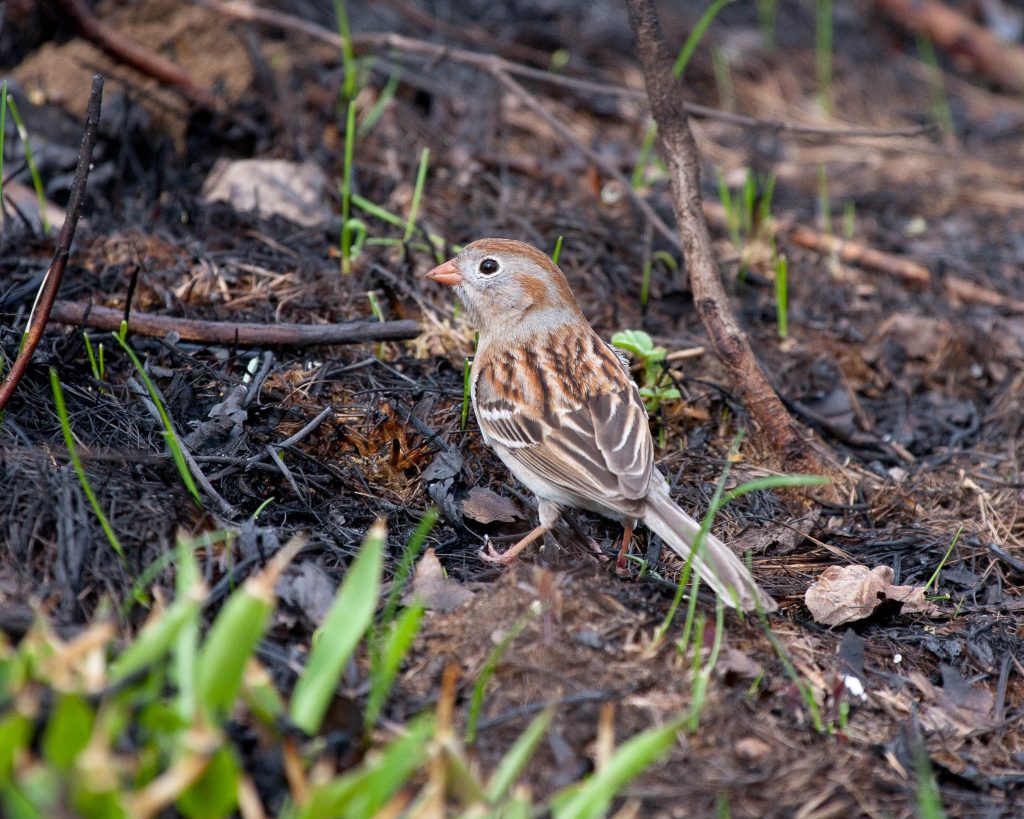 On the other hand, some of the other bird species Reiley examined didn’t fare so well. The field sparrow population only increased by 33% of the desired CREP goal — and the northern bobwhite population only 6%. Reiley and his team concluded that there would need to be a land restoration increase of at least 5% to help harbor a productive increase in willow flycatcher population numbers, and the amount of restored lands would need to increase very substantially for field sparrows (118%) and northern bobwhites (598%) to flourish.

The results have been mixed, but CREP efforts will continue, as they have proven to help with species native to Illinois like the Bell’s vireo. Reiley suggests that focusing on the population goals themselves may not be the most effective way in ensuring some vulnerable species are able to survive. It’s important to consider “not just where birds are at historically, but how much land is actually available for birds on the landscape?” He emphasizes the need for more research into how the land can be better utilized, and what’s realistic in a state dominated by Big Ag.

But he’s optimistic overall about CREP across the country: “Interestingly, all the species we studied, and probably many others not studied, would likely rebound to historic levels if 1% of the agricultural land in Illinois was restored through CREP. This program is clearly important to populations of declining wildlife – not only in Illinois, but also in the other 26 states where it operates.”

So, there’s hope that agricultural impacts on the environment can be mitigated, even if the numbers and the goals seem small at first. After all, small things shouldn’t be overlooked — or underestimated. The palm-sized, delicate, and chirpy Bell’s vireo has certainly proved that it wants to thrive. Hopefully with stronger conservation efforts and more proactive and mindful agricultural practices, the Bell’s vireo will continue to flit around from shrub to shrub in a prairie near you, beneficiaries of a productive landscape hospitable to both birds and corn.

Vivienne Henning is from Oak Park, Ill. She is a May 2019 Illinois graduate with a B.A. in English, earning a high distinction for her honors thesis. She also received the Certificate in Environmental Writing (CEW). Since graduation, she has been working at a nonprofit organization while pursuing a publishing career in Chicago. This article was written for the CEW 498 capstone course in Spring 2019.