If Mushrooms Could Talk 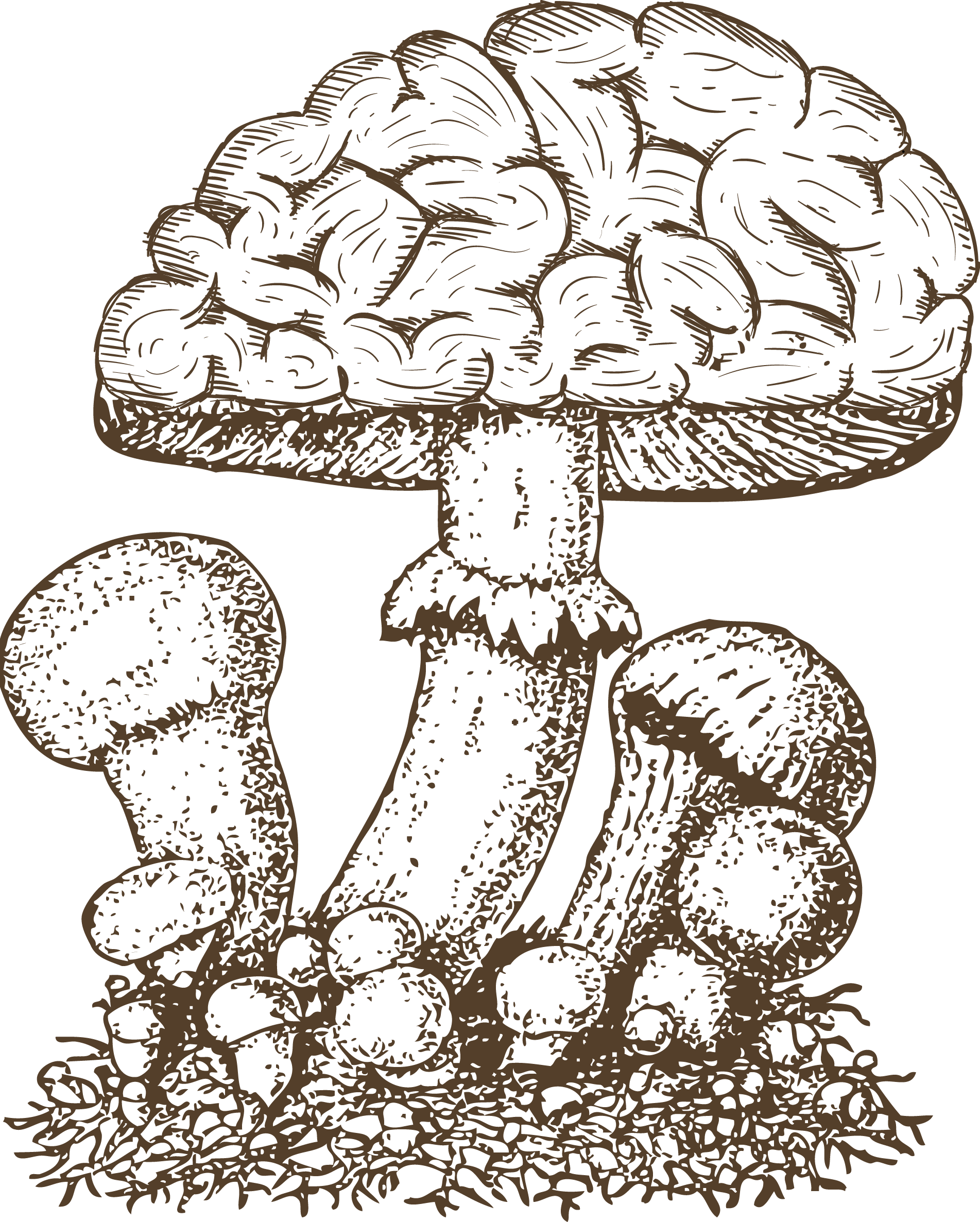 You are on a hike through an expanse of old-growth forest in the Pacific Northwest. As you admire the ancient green canopy overhead, your heart beats in tune with the life that exists here. Suddenly, you stumble upon a rotting log covered in a foreign-looking growth: orange-tinged, wrinkled, and porous. A feeling of disgust replaces the sense of connection you felt just a moment before. The irony? You are actually more closely related to this fungus than you are to the trees and other plants. The life form that you flinch away from is the very type from which you descended.

We are fungal bodies estranged from our roots, and a necessary reunion is slowly but surely underway.

1.3 billion years ago, the North American soil we currently occupy belonged to the massive Rodinian supercontinent. The land was barren and rocky, as land plants had not yet evolved. A singular, massive ocean that surrounded Rodinia teemed with the earliest forms of microbial life: cyanobacteria, green algae, and fungi. A symbiotic relationship between these life forms, discovered only in the past few decades, was ultimately responsible for our current atmospheric conditions and all life that has evolved — including ourselves.

Fast-forward, if you will, to 500 million years ago and the Cambrian Explosion — the eruption of terrestrial life. It was roughly during this time that we split from fungi. Fungi became multicellular and went underground, while creaturely life hit the beach from the oceans. As subterranean life evolved, a tremendous species diversification occurred, resulting in 5 million known species of fungi today.

While outer appearances obviously differ, animals and fungi share more than half their DNA. Mushrooms, like us, inhale oxygen and exhale carbon dioxide. The two kingdoms belong to the same trophic level. Unlike plants, neither fungi nor animals are producers; instead each uses an external source for food energy. Some of today’s most successful antibiotics (such as penicillin, which was derived from the Penicillium fungus) were made possible due to our shared pathogens, as fungi don’t rot from bacteria. More wonderful still, the basic reproductive structure of a fungus, the mycelium, involves a paradigm that can be observed throughout the universe. Its network-like design mirrors that of dark matter, neural connections in the brain, and even the human-created Internet. As deep as fungi spiral into our planet’s past, so too do they offer exciting pathways to a more earthy, sustainable future.

Fungi reproduce by means of spores. When germinated, the spores produce a mass of thread-like, single-cell-wide structures called hyphae — collectively known as mycelium. Often referred to as the web of life, mycelial networks transport and deliver nutrients to other plants in need. Though usually invisible to the human eye, mycelium is virtually omnipresent. It permeates nearly all land masses on Earth: a single cubic inch of soil can contain more than 8 miles of mycelial cells. And it knows you are there. With each step you take on your hike through the forest (or back yard), the sentient underground mycelial mats spring to attention. Your small footstep evokes a breakdown of wood and other organic material; the power source for the mycelium. The sensitive membranes respond immediately in an attempt to collect nutritional debris.

This system is so intelligent that a single North American fungus has achieved the title of largest living organism in the world. In Eastern Oregon lies a 2,200-acre honey mushroom mycelial mat that is almost 2,500 years old. More neural connections exist in a 1,000-acre mycelial mass than we have in our brains. The network-like design of mycelium allows it to respond to catastrophe; the cell density and sensitivity allows it to regulate new substances that it comes into contact with. Mycelium is in constant communication with its surrounding ecosystem and thus is able to prevent predators from consuming it. Clearly, the implications of common fungi don’t warrant the “mycophobia” characteristic of current social attitudes.

Mycologist Paul Stamets has devoted his career to promoting a sustainable, mutually-beneficial future between humans and their fungal ancestors. And as the Earth’s environmental miseries mount, people are beginning to listen. 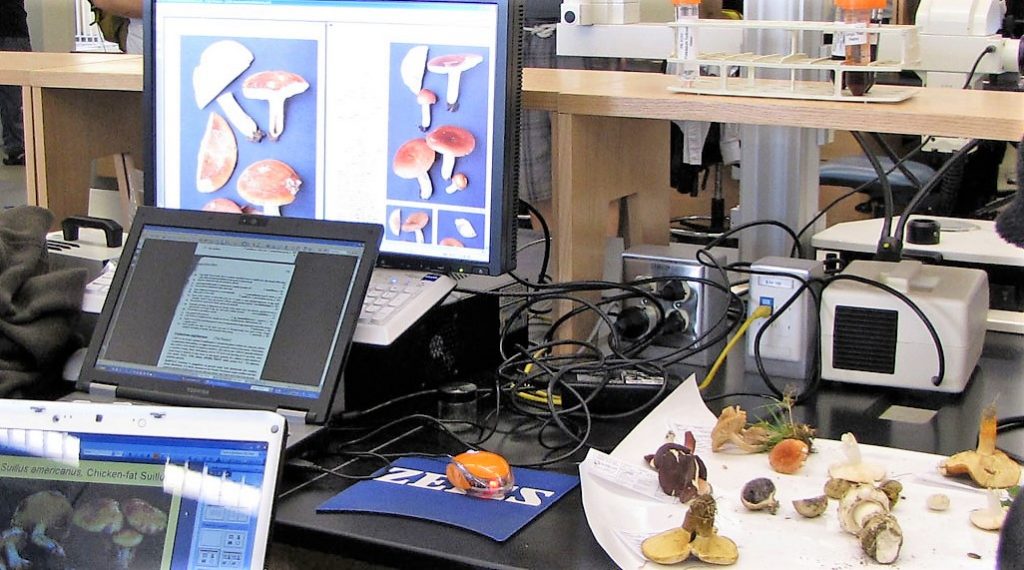 “I believe the invention of the computer Internet is an inevitable consequence of a previously proven biologically successful model. The Earth invented the computer internet for its own benefit, and we, now, being the top organism on this planet, (are) trying to allocate resources in order to protect the biosphere,” Stamets declared in a much-watched TED Talk titled Six Ways Mushrooms Can Save The World. For Stamets, we need to engage our fungal allies in order to prevent a loss of biodiversity.

Increasing numbers of independent studies are being carried out by Stamets and others who are able to see an integrated future between humans and fungi. The results have been astounding, in regard to both environmental bioremediation and pharmacological research.

One such experiment conducted by Stamets, in cooperation with Battelle Memorial Institute Laboratories, demonstrates the remedial powers of mycelium. Four piles of organic material were saturated with diesel and petroleum wastes. One acted as the control pile and went untreated; one was treated with enzymes; another was treated with bacteria; and the final was inoculated with mycelium. After six weeks, the pile of waste treated with mycelium was the only one containing living oyster mushrooms. According to Stamets, the other piles were “dark and stinky.” The spores of the newly grown mushrooms attracted insects, which then laid eggs and attracted larvae as well as birds.

What started as a pile of oily waste became an oasis of life after its treatment with mycelium. Hydrocarbon levels went from 10,000 parts per million to less than 200 ppm. By contrast, the other three piles remained toxic and lifeless. These results open up fungi’s extraordinary potential to naturally revitalize our increasingly polluted world.

The bioremedial properties of mycelium extend to another crucial issue of our time: saving the bees. We are heavily reliant upon these tiny buzzing insects and their tireless work as pollinators for the food on our plates. In recent years, colonies of honey bees in North America have been declining due to various stressors, including the glyphosates and neonicotinoids used as agricultural pesticides. A major bee affliction is deformed wing virus. Enter Stamets and mycelium. It turns out extracts from the amadou mushroom can double the lifespan of bees, and reduce the deformed wing virus by over a thousand-fold in just 10 days. Stamets has multiple patents pending after this groundbreaking discovery. 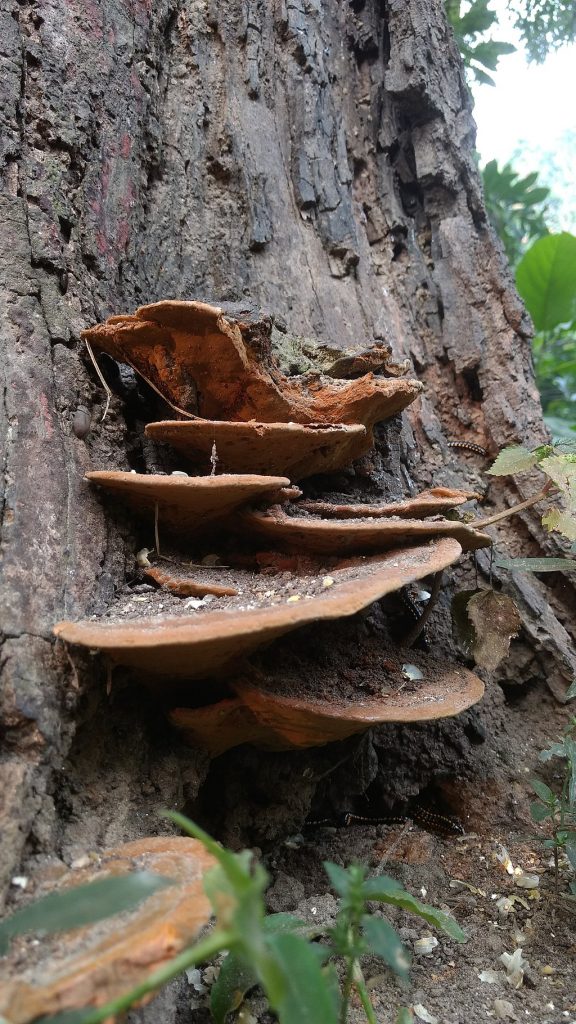 Consider how Winnie the Pooh reaches into rotting trees and produces a handful of honey. Bees are attracted to the mycelium that thrives in rotting wood. So as deforestation increases, mycelial habitats decrease, as does the bee population, and in turn the chances of Pooh finding his favorite snack.

Our fungal ancestors not only hold the power to heal our environment, but ourselves as well. Ongoing and extensive research is shedding light on the remarkable medicinal properties of mushrooms. There are obvious limitations on the communication and acceptance of such research due to the illegality of psilocybin, a hallucinogenic compound that is present in certain mushroom species. Though taboo, controlled administration of psilocybin can have extraordinary healing benefits for conditions such as post-traumatic stress disorder (PTSD), depression, and certain cancers.

A massive amount of neural connections occurs while the brain is under the influence of psilocybin. The compound substitutes as serotonin and is able to activate neurogenesis, allowing new pathways to form in the brain. Stamets, who was cursed with a severe stutter as a child and teen, successfully rewired his own brain during a mushroom trip and was able to permanently rid himself of the embarrassing condition. Psilocybin and similar entheogens give users an enhanced sense of empathy, greater courage, and an extension of fear response; this is why the resetting of neurological pathways conditioned to fear (like PTSD) is possible. Similar expansion of cognitive function can be obtained through consumption of a legal strain of mushroom called lion’s mane, widely sold as tea.

In the spirit of Paul Stamets, ethnobotanist Terrence McKenna has proposed an idea that might seem far-fetched yet makes you wonder. The reason why early humans evolved past other animal species in terms of capacity for language, symbolism, and rituals is due to fungal interactions with hallucinogens such as psilocybin. The foraged fungal hallucinogens may have empowered neural pathways responsible for the elaboration of language, and thus propelled our species forward to the powerful position we now hold. Here, we must look back to our species past in order to preserve our future. It’s no wonder America’s most celebrated writer on food, nature, and sustainability, Michael Pollan, has turned to hallucinogenic fungi as the subject of his latest best-seller.

The incorporation of mycelium into our fungus-phobic world certainly has barriers to overcome. Society has been conditioned to fear the unknown, and the mysterious fungal world from which we were birthed presents more than a few queasy questions. But we must resist being “biologically provincial” as Stamets puts it. The more we study this complex topic, the more we realize we don’t know. At the very least, we should cultivate appreciation for our fungal ancestors, realizing that they have much to teach us. On your next hike, get down with whatever strange mushroom species you may see. Nose the dirt and eye the fungus. Realize that 500 million years ago, this was you. And 500 million years from now, it just may be the only vestige of our life that was.

Emily Luce is from the northern suburbs of Chicago. She earned her bachelor’s degree in Advertising from the University of Illinois in 2018, and plans to live and work in New Zealand. This article was written for ESE 360, the introductory CEW course, in Spring 2018.